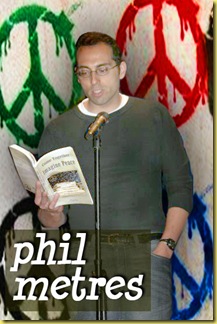 Full name: Philip Metres (Honestly, my “full name” is Philip J. Metres III, but that sounds a little too Thurston Howell for my tastes. Plus, I feel as if I’m at least three people when I write—a patryoshka, if you will.)

Habitat: University Heights of the Mind.

Distinguishing Markings: To See the Earth (2008), Behind the Lines: War Resistance Poetry on the American Homefront (2007), among the recent.

Diet: There is too much great art in the world, and not enough life to live it. Have you taken your Chekhov this morning? Don’t forget: three shots of Whitman every day, a little bit of Hopkins (aperitif). The sort of punk rock that riles you up just enough that you almost forget the words, but find them haunting you later. I’m the sort of twisted individual that finds depressing documentaries uplifting and cathartic.

During the 1991 Gulf War, U.S. fighter pilots were shown

This is an argument with

the shape of a sex organ, a poem

in the arc of a dinosaur

the dope of a moper, a heart

attack in the slope

of a stiffening shoulder, a lube job

rubbed on the rods

of excited fighter pilots, a fuse

that refuses to choose, an ode

to a code that ignites

on and we ride it into the burning

West, the postcoital sun as it sets.

Posted by michael salinger at 8:03 AM

Not only a might good poet but a mighty good man.

Read more of his work in the Crisis Chronicles Online Library: Phil Metres.

His collection To See the Earth (CSU Press) is a must have.

Thanks, Michael, for posting this, and JC, for being there! Happy summer, all!