Happy summer, everyone.
Posted by Unknown at 8:04 PM No comments:

Artist/poet B.M. Stroud first came to my attention when his performance of his experimental visual/audio poem won the Hessler Street Fair Poetry Contest in 2012.

Now he's published a manifesto: "Experimental Poetics: Where are the Poetic Pioneers?"

Sound interesting?  To keep up with what he's up to, check his page Stroud: experimental artist.

Posted by Geoffrey A. Landis at 8:14 PM No comments: Posted  to the tumblr A Fiery Flying Roule is a new poem from Tom Raworth in response to the U.S. security breach; he calls it “Just a quick doodle with some of the trigger-words in the Department of Homeland Security ‘Analyst Desktop Binder.’” Land lies in water; it is shadowed green.
Shadows, or are they shallows, at its edges
showing the line of long sea-weeded ledges
where weeds hang to the simple blue from green.
Or does the land lean down to lift the sea from under,
drawing it unperturbed around itself?
Along the fine tan sandy shelf
is the land tugging at the sea from under?

Some Realms I Owned: Elizabeth Bishop in Manhattan

A newly translated interview with Federico García Lorca by Luis Méndez Domínguez from 1933.


Thomas Pynchon Returns to New York, Where He's Always Been

The Public Life of Poetry: An Interview with Natasha Trethewey Posted by JJ Stickney at 9:02 AM No comments:

The new Lake Effect Poetry 2013 Team Anthology has been printed -- spread the word! This anthology features poetry from your 2013 Lake Effect Poetry slam team: AKeemjamal Rollins, Christine Howey, Caira Lee, and Arianna Cheree, and also poems from the local greats such as Redd's, Eris Zion Venia, Theresa Göttl, Carla Thompson, Skylark Bruce, Joshua Gage, and Azriel Johnson, not to mention a cover by, uh, that would be me. And, the money raised by sales of the book goes towards a good cause-- getting our team to National Poetry Slam in August!  Boston, look out: the Lake Effect is coming!
Only ten dollars, including shipping-- order it now.

Posted by Geoffrey A. Landis at 8:03 PM No comments:

Harper's asks: Why is Modern Poetry so Bad?

Why is Modern Poetry so Bad?

According to Ron Charles in the Washington Post's style blog,  Harper's magazine just hit the stands with a 6,000 word essay by Mark Edmondson, "Poetry Slam, or, The Decline of American Verse" asking that very question.

Hit 'em, Professor Mark!  “They simply aren’t good enough. They don’t slake a reader’s thirst for meanings that pass beyond the experience of the individual poet and light up the world we hold in common.”

“'You must play the game that is there to be played,' Edmundson writes. To get the fellowship, the first book, the teaching job, the new poet 'had best play it safe, offend none.'”

I don't think he's been to Cleveland, but hey, can't be everywhere.

With their insistence on the impermeable barriers of race, gender and class, these liberal post-modernists keep anyone from saying anything about anything but his own private world. “How dare a white male poet speak for anyone but himself. . . . How can he raise his voice above a self-subverting whisper?”

So, are modern poets bad?  Or just the ones published in the reviews that Edmondson reads?

-and, ha!  Barely has the Charles article hit the web, then the huff responds with an article by Seth Abramson,  "Why Is Contemporary Poetry So Good?"

Olbviously he must read different poets than Edmundson! 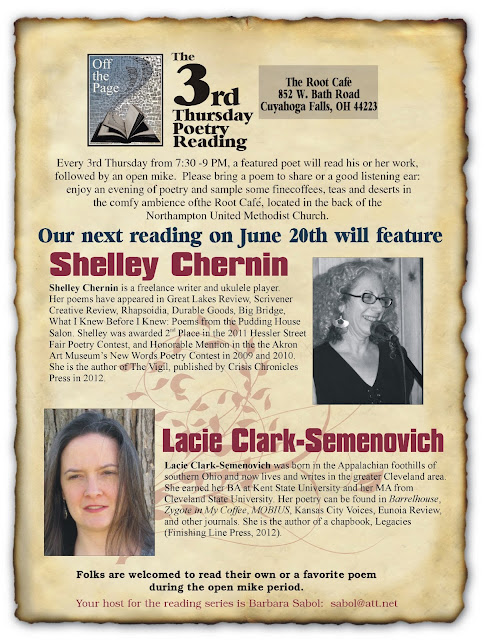 Posted by John B. Burroughs at 7:18 AM No comments: With a personal video revolution that's been ongoing for years now, there is a heck of a lot of video of cleveland poetry out in the world, and being loaded up on the web.

The Literary Cafe in Tremont has held a reading series for years (now they're the host for one of the Writing Knights events).  They have whole pages full of videos, including a page of older videos of readings and slams dating back to the '90s.

It's not the same as being there, but there sure is a heck of a lot of video of Cleveland poetry out there.
Posted by Geoffrey A. Landis at 7:25 PM 2 comments:

Can a Robot tell whether a Poet's a Pro?

The method the computer program uses to analyze whether a poem "has the characteristics of a professional poem" is described in a pdf here. (Actually, if you're interested in linguistic analysis, their discussion of how they did their analysis to determine what characteristics successful poems had compared to amateur poems is quite fascinating.  Even if the "Analyze my Poem" application is more of a party game for poets than a real tool for telling good from bad.)

One Mic Open: An Imitation of Live 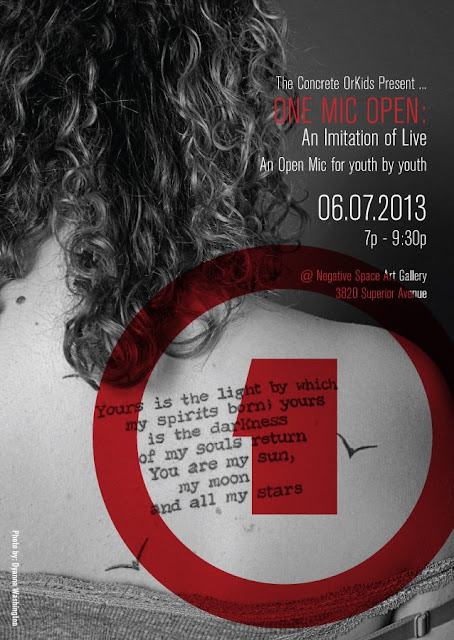 An Open Mic Session for youth across Cleveland and surrounding areas.

One Mic Open: An Imitation of Live is a 45-minute choreopoem and Open Mic. session presented by the Concrete OrKids, a performance poetry group from the Cleveland School of the Arts Creative Writing Department.

One Mic Open is one of the only events of its kind in Northeast Ohio because it is written, produced, hosted, marketed, and promoted BY youth FOR youth ages 13-19.

Leave us a message if you or someone you know would like to sign up early for the Open Mic.