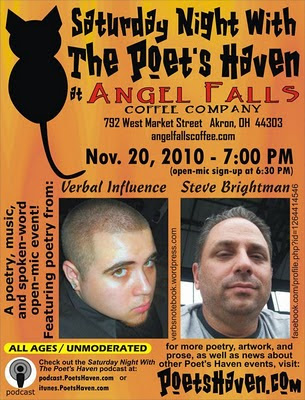 Saturday Night With The Poet's Haven is at Angel Falls (792 West Market Street in Akron) on November 20th, with featured poets Steve Brightman and Eric "Verbal Influence" Odum! The Love Initiative's Music for Meals Food Drive will also be present, collecting boxed and canned goods for area food banks (grocery store gift cards and cash work, too). Anyone who donates at this event will receive an exclusive, limited edition copy of Vending Machine: Poetry for Change, a NEW chapbook/zine published by The Poet's Haven!

Steve Brightman is 1/4 cup dijon and whole grain mustard, 1/4 cup honey, 1/4 cup ground coffee, and 1/4 cup deep dark molasses. He lives in Kent, Ohio, with his pionus parrot and thinks that PNC park is the finest cathedral in North America. His poems have been featured in Pudding, Kansas City Voices, Origami Condom, My Favorite Bullet, and he was included in the Ohio Bicentennial Anthology titled I Have My Own Song For It: Modern Poems about Ohio.

Eric "Verbal Influence" Odum is a 20-year-old poet hailing from Cleveland, Ohio. He has been part of Playhouse Square's SlamU! program for the past five years. He is a peer mentor, running workshops and working on a personal level with teens on performance and writing. He was part of Cleveland's National Youth Poetry Slam team for the past three years. He also runs a poetry group called Spit Poet Spit, which performed at Urbean Joe’s Coffee this past September. Eric is the founding member of an after school poetry group called New Age Poets. He started writing at the age of nine and began performing at fifteen. He has released one chapbook, Unspoken Declarations, and has a new CD called Verbal Therapy.

This is an ALL-AGES/UNMODERATED event, meaning kids are welcome to attend and participate, but parents should be aware that there are no restrictions on language. Some performances may include coarse language.

After the features, there is an open-mic. The open-mic is recorded for the Saturday Night With The Poet's Haven podcast. Poets and musicians wishing to perform at the open-mic can sign-up at 6:30. The features will begin at 7:00. ALL TIMES LISTED ARE REAL-TIME, NOT "POETRY STANDARD TIME." In other words, GET HERE BEFORE 7:00!!!

Thanks for posting this.. it should shake up to be quite a night.

I think Steve left "ham" out of his ingredients list, lol. Looking forward to tonight at the Poet's Haven!