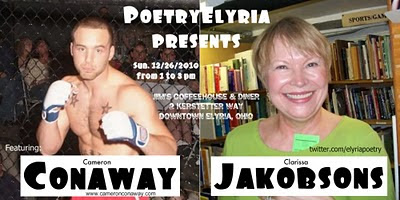 Sometmes the best presents come after Christmas. Cage-fighting poet Cameron Conaway has chosen PoetryElyria for the first stop of his tour across America before he heads to Thailand for a year. He will be joined by northern Ohio's very own Clarissa Jakobsons from 1 to 3 p.m. on Sunday December 26th during PoetryElyria at Jim's Coffeehouse and Diner, 2 Kerstetter Way in Elyria, Ohio. An open mic will precede featured performances by these two fine word artists.

Cameron Conaway was the 2007-2009 Poet-in-Residence at the University of Arizona’s MFA Creative Writing Program. He is 2-0 at 155lbs as a mixed martial arts fighter. He has trained with Renzo Gracie, the London Shootfighters and will be studying Muay Thai kickboxing in Thailand for the next year. An MMA fighter and an award-winning poet; an MMA Trainer at Gold’s Gym and a creative writing instructor for Johns Hopkins Center for Talented Youth; a certified personal trainer through the National Strength and Conditioning Association and a dynamic anti-bully spokesperson, Cameron is quickly becoming known worldwide as the warrior poet. Tuttle Publishing will release Cameron’s memoir Caged: Memoir of a Cage-Fighting Poet in fall 2011. Salmon Poetry will release his book of poems, Until You Make the Shore, in January 2012. The book of poems grew from his experiences teaching poetry inside an all-female juvenile detention center. For more information visit www.CameronConaway.com.

Clarissa Jakobsons instructs various art and writing classes at Cleveland’s Cuyahoga Community College. Artist, poet, and Associate Editor of the Arsenic Lobster poetry magazine, she was featured in Paris, France at “Shakespeare and Co,” in Florida and Ohio, and she was first place winner of the Akron Art Museum 2005 New Words Competition. Publications include: Ruminate, Qarrtsiluni, Ascent Aspirations, The Yale Journal for Humanities in Medicine, DreamSeeker Magazine, and Literary Mama, to name a few. She holds a B.F.A. in Visual Arts and has exhibited paintings at Akron Art Museum and Kent State University.

Currently, she weaves unique one-of-a kind artistic books, which have been exhibited in Provincetown, Denver, and Cleveland shows. In fact, the Cleveland Museum of Art has asked that “Camille Claudel in Bardo” join the Ingalls Rare Books collection. Don't be surprised to see her kicking sandcastles and painting Provincetown dunes, climbing majestic Berkeley Hills, igniting Tai Chi poems from the towers of Notre Dame, lifting weights on Treasure Island, or walking under an Ohio crescent moon.

"Clarissa is a beacon of warmth and inspiration who writes with the intensity of Shakespeare and a passion that is wealthy with life," —Chris Crittenden, poet, and Ethics professor at University of Maine.

PoetryElyria takes place every Sunday afternoon from 1 to 3 pm at Jim's Coffeehouse and Diner in downtown Elyria, just doors away from the gorgeous East Falls Riverwalk. John Burroughs of the Lix and Kix Poetry Extravaganza will emcee.