Chernin & McMillen Ring in the New Year on 1/2 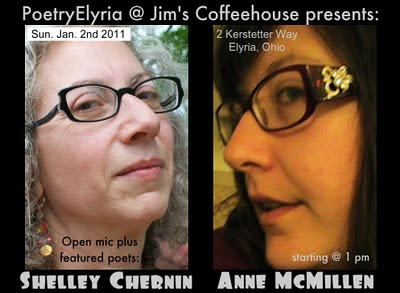 Sunday January 2nd from 1 to 3 p.m. at Jim's Coffeehouse & Diner, 2 Kerstetter Way in downtown Elyria, Ohio, join us for an open mic followed by performances by these two featured poets:

Shelley Chernin is a freelance researcher, writer, and editor of legal reference books who writes poetry to maintain her insanity. Her poems have appeared in Scrivener Creative Review, Rhapsoidia, What I Knew Before I Knew: Poems from the Pudding House Salon-Cleveland, the Heights Observer, and the 2010 Hessler Street Fair Poetry Anthology. The Akron Art Museum awarded her Honorable Mentions in its New Words Poetry Contest in 2009 and 2010. She recently moved from eastern Cuyahoga to Lorain County, where she's enjoying the measurement of snowfall in inches rather than feet.

Anne says: "My full name is Anne McMillen, I'm 29 and was born in Elyria Ohio. I went to college for several semesters at LCCC and then on to Bowling Green State University until I dropped out to focus on writing. During those years I traveled the U.S. and eventually moved to San Francisco for 5 years. My first published work was at unlikelystories.org when I was 18 years old. I currently have five published books of poems and am working on my first full length novel. My writing focuses on the dysfunctional home life I endured as well as the sociological problems and issues I observe daily. For a living I work as an optician in a welfare clinic and help people who are disadvantaged obtain a better quality of life. I'm queer and unconventional and reside now in Cleveland with my partners whom I love dearly and care for immensely. I spend a lot of time doing outreach with young queers, organizing speakers and entertainment from out of state to come and spread the good word. Right now my life is better than it ever has been and coming from extreme poverty I consider myself a success even if financially I'm not much better off than I was as a child, but I have a very rich life filled with love, friends and a great community."

John Burroughs of Lix and Kix will emcee. Upcoming features at Jim's Coffeehouse and Diner include: