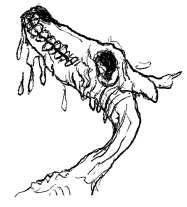 The April issue of the Cordite Poetry Review is a special issue on zombie poetry.
Zombies are a peculiarly American trope, and it's odd to see Cordite ("Australian poetry and poetics") doing an American obsession. Despite their invention in Haiti (does anybody still connect zombies with vodoun any more?), zombies were drafted into America by George Romero, who, with Night of the Living Dead, reenvisioned and redefined the idea of the walking dead so vividly that even forty-some years later, we still see them as Romero saw them. As authentically American as American flags on the fourth of July.
(I was at a party last year when the discussion turned around to peoples' zombie-apocalypse contingency plans (*). What are your plans for how to survive when the hungry walking dead prowl the abandoned, burned-out homes of your home town? Quick tip: moving to an island doesn't work. Zombies don't need to breath; they can walk on the bottom.)
So, back to Cordite. (Cordite, by the way, is a World-War-I era form of gunpowder used for rifles and artillery. It's called "cordite" because it's formed into cords-- it looks like strands of orange-white spaghetti. If you're writing men's adventure fiction (or poetry), could you please stop talking about "the smell of cordite"? It's mostly obsolete, hardly anybody uses it any more. Thanks you.) So, zombies have long since infected the world, even Australia.
What makes us so fascinated about zombies, anyway? Does the world need zombie poetry? And, more important-- is it any good? Death has fascinated poets since around when Gilgamesh was king-- Death be not proud, Because I could not stop for death, Rage, rage, Garden of Proserpine, not to mention about a million others, including just about every poem that Edgar Allen Poe ever wrote. So, what are zombies, but death on the prowl, coming for you at any moment your attention wanders?
So, sure, why not zombie poetry?
Editor Ivy Alvarez says:
"We know more about the undead species who have lived in our hearts and dined on our minds than ever before. We have probed into their weaknesses, evaded their tricks and know well of their canny (and uncanny) chicanery.
We know these things … because they were once like us. Let us not rest on our laurels. Let us be vigilant and as ready as we can be for the uneasy future that is Zombie 2.0."
---
*See also the story "Some Zombie Contingency Plans," by Kelly Link. Check it out; Kelly Link is really weird. And I mean that in a seriously good way.
Posted by Geoffrey A. Landis at 11:13 AM

I'm intrigued... especially that poetry is cut up into these strange genres. Can anyone tell me why?

And on the subject of zombie poems, a sneak peek at Karen Sandstrom's blog reveals an upcoming book by poet Sara Holbrook (with illustrations by Karen Sandstrom): Zombies! Evacuate the School! Check it out.
Zombie poems! It's not just a genre-- it's a movement!

Here are three of my zombie haiku:

What I like about zombies is their use of vehicle in a metaphor. They can be used to illuminate many different things in modern society, if properly applied.