Yeats and McNiece, at CPT 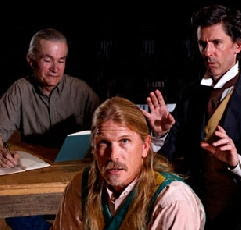 Cleveland poet and performer Ray McNiece is on stage in the Cleveland Public Theatre's debut production of "Open Mind Firmament," a play about William Butler Yeats, and most specifically focussed on Yeats' Cuchulain cycle, a series of short plays about incidents in the life of the mythic Irish hero Cú Chulainn (the pronunciation of whose name, by the way, is a subject of some scholarly debate: Yeats prefered the pronunciation "ku-HOO-lin").
Yeats was himself intimately involved with the theater (along with friends, he established the Irish Literary Theatre to produce Irish and Celtic plays), on a mission to produce a form of theatre that avoided "vulgar realism" in favor of an avant-garde theatre emphasizing symbolism, nuance, and poetry.
Roy Berko calls this production "visually compelling"-- I'll agree with that; the stagecraft (on a very nearly empty stage) is magnificent. This is a performance combining symbolism, dance, scholarly analysis, and Irish song. I think Yeats would be proud. And Ray McNiece is brilliant in the role of Cuchulain.
Better check it out soon, though (7pm, Thursday through Sunday, 6415 Detroit Avenue Cleveland)-- after Sunday's, next week will be the final weekend. Definitely worth seeing! (and it makes me want to go out and read more Yeats-- and more about Cuchulain, too!)
William Butler Yeats
photo by George Charles Beresford
Posted by Geoffrey A. Landis at 10:26 AM

Oops, I'd hit "post" when I'd meant to click "save", so the first version of this that I posted was only partially done.

Yep - I highly recommend this production. One of the best theater pieces I've seen in years.

Hope to see it this week!

I saw the show last night with an almost full house, including a number of local poets. The show is theatrical poetry. This is the final weekend. Go if you can.