Poems for Peace by Philip Metres 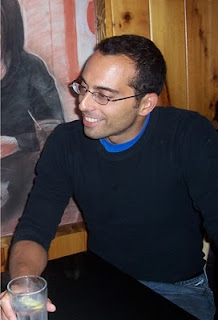 The Poetry Foundation has just published an article about "How to build a collection that moves beyond anti-war poetry" by Cleveland area author, educator and peace activist Philip Metres. Check it out here:

Professor of English at John Carroll University, Dr. Metres was recently awarded the 2010 Cleveland Arts Prize for Emerging Artist. His books include To See the Earth (2008), Come Together: Imagine Peace (anthology of peace poems, 2008), Behind the Lines: War Resistance Poetry on the American Homefront since 1941 (2007), Instants (2006), Primer for Non-Native Speakers (2004), Catalogue of Comedic Novelties: Selected Poems of Lev Rubinstein (2004), and A Kindred Orphanhood: Selected Poems of Sergey Gandlevsky (2003). His poetry has appeared in numerous journals and anthologies, including Best American Poetry and Inclined to Speak: Contemporary Arab American Poetry. Find him online at www.philipmetres.com and http://behindthelinespoetry.blogspot.com.
Posted by John B. Burroughs at 4:50 PM

Those interested in peace poetry might pay attention to Consequence magazine, and the poets among us might want to take a look at the 2010 Consequence Prize in Poetry (which is that rare thing in the world of poetry, a contest with no submission fee.)

Thank you, Geoff. I'd never heard of Consequence before.