What you reading there?

Here’s an essay from a friend down south – all the way in Columbus – Scott Woods, poetry champion extraordinaire. This piece first ran at Got Poetry dot Com and is reprinted here with the author’s permission:
*********************************************
I was at the National Poetry Slam in St. Paul a couple of weeks ago (awesome time) and I noticed something right away: there were a lot more competitors reciting poetry from paper than usual. I mean, to the point of comment. 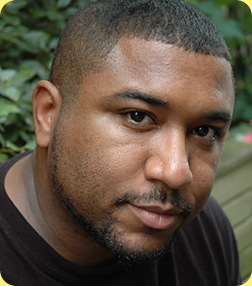 On one hand, this delighted me a great deal. In any given year I’m usually one of about three paper poets (a poet that performs a poem from paper or a journal or some other vehicle of codification) out of about nearly four hundred poets who show up to compete. Most people who consider themselves performance poets memorize, and in slam competitions particularly so. I can’t tell you how many times over the years I’ve heard from poets or audience members or judges that poems that are memorized are somehow better than ones that aren’t. There is the notion that a poet who bothers to commit their work to memory is somehow more dedicated to their craft than the poet who does not. I ask you, which poet is more dedicated: the poet who memorizes ten poems that they recite at every featured reading they have over the course of a few years, or the poet who performs ten times that number in the same amount of time, but from paper?

I have made a conscious decision not to memorize any of my poetry. It is, quite literally, a mission with me. I’ve memorized poetry in the past to see if I could do it, and when I did the results were pretty impressive. But in the end I have dedicated myself to not memorizing poems because I want poets to know that memorizing a poem doesn’t have to be the entry fee to performance poetry. You can still win slams – even the big ones - from paper. You can still give incredible features and do tours from paper. You can still make an audience lose its complete and utter mind from paper. It all comes down to the poem and how deeply you’re willing to commit to giving a performance of that poem.

I lay no claim whatsoever that my platform of performing from paper only had anything to do with the amount of paper I saw in slam competition this year. I think a case could be made, and I’ve certainly heard things over the years from coaches that imply my mission has had some effect. Whatever the reason is for more paper performances this year I don’t care...I’m just glad the day of acknowledging the power of papyrus has returned.

Not that it wasn’t here along, mind you: any random poetry reading that isn’t swamped with people trying to show their performance chops in equal measure to their writing chops will be a reading filled with paper. There are more poets reading from paper than there are poets who aren’t on the whole, so in the grand scheme of things it’s not that big a deal. It only really matters in those circles that place a premium on performance over writing ability.

Anyhow, while I ultimately do not care about who’s doing what for what reason, I do care about The Big Four. A while back I drafted four rules about performing poetry from paper. Application of these rules is sorely lacking in performances I see everywhere I go:
1. Commit.
2. Voice compensates for body.
3. You aren’t allowed to fuck up.
4. It always comes down to the poem.

1) Commit.
Knowing is not memorizing. I can recite back parts of my poems, but at some point I need my line fed to me because while I know my poems pretty well, I do not have them memorized.
Also, reading is not performing. Sounding like you’re reading makes me feel like I’m in school. I hated school, especially the poetry units. We can all try a little harder in this area.

2) Voice compensates for body.
If you’re performing from paper, you’re already down a hand or two, or blocked by a music stand. The audience will have a hard time not noticing these things. Adopt the principle that if you lose one thing you should compensate for it by amplifying another. After your poem, your voice is your most powerful tool, not your ability to memorize or move around on stage. The poem starts to live in the performance world when you open your mouth, so use it: play with the texture of your voice, the tone, the rhythm, the breadth of its range of meanings.

Also note that I have been saying “perform”, not “read”. Most problems with poets and paper stem from not making this distinction. Conversely they do two things that make me wish they’d just stop writing poetry altogether: a) they don’t bother to commit to a performance since they’re going to be seen reading from paper anyway, and b) they perform with those annoying gaps every other line (you know: EXCITED SHOUTING! Look for my line. EXCITED SHOUTING! Look for my line…). Neither of these is an excuse for a poor performance from paper. If you can memorize, there is no reason why your reading from paper should suck. In fact it should be easier.

3) You aren’t allowed to fuck up.
This one is pretty unforgiveable to me. If you lose your place in a poem that’s sitting in front of you, then you’re an idiot. People who do this tend to do it because they thought they had more of the poem memorized than they actually do, or they get so caught up in the performance they forget that a part is coming up that they don’t actually remember. Idiots. Look, it’s very simple math:
You – memory of poem = no poem in your head
…so quit pretending you know your poem and invest in some fucking focus.

4) It always comes down to the poem.
This is my answer to everything about poetry, but it really means something here. A great poem will forgive a lot of things, will clear the way for a lot of risks you might take as a performer. Don’t worry about your performance more than your poem. In the end, you want audiences to remember your poem, not that you were really passionate about whatever it was you were up there talking about that they can’t somehow recall under questioning. Everything in life is easier if you start off by doing things correctly right out of the gate.

I love performing poetry, and performing it from paper doesn’t diminish that for me or my audiences. I love pulling out that thick ragged folder – “Goldie” – and embracing the challenge of riffling through it for the perfect poem at the perfect moment. And I won’t let a little thing like memorization stop me from doing this. It may stop me from being asked to do certain gigs, but that’s the booker’s loss. I will fuck your audience up from paper, just as easily as someone who’s flailing about and giving you jazz hands for twenty minutes. I don’t apologize for not memorizing. No one should, if they believe that the work they will present is just as good read as it is memorized AND that they will deliver it with the extra mile required to make that belief true.
Posted by michael salinger at 8:38 AM

Wow, I love it! Agree completely-- it's about the poem!

#3 seems to me more unforgiving in slam. Yes, we should do them without a stumble, but we're human after all. The most common stumbles I see are from excess adrenaline, not lack of preparation.

The opposite extreme of the dictum to have all work memorized came from one extremely well-published literary poet who told me he never reads a poem more than once. He is prolific, and brings solely new material to all his readings.

Luckily, we don't have to pick one extreme or the other. But if I did have to, I'd pick that one. I tried memorizing and only resented the time it took away from writing and editing. And while I appreciate audience desire for familiar material, I am always most excited about reading the new ones--and about hearing other poets' freshest work.

I get asked for advice on how to improve slam performances rather often since taking over the slam in Canton. What I tell every poet who asks me is this: Know your work, but keep the page in front of you. Having your work memorized will improve the performance half of your score, but nothing will kill a score faster than a poet who stops in the middle of a poem because he or she cannot remember the next line. Look up at the audience, engage them, but don't be afraid to look at your page when you need to. The most skilled performers can look down and find their place without the audience even realizing that they needed to.

We've had someone judge several times who will actually drop a score if the poet doesn't have the piece memorized. His view on it is that you should plan ahead what piece you will compete with. I argue that I know poets who write three or four poems every day and that nobody can be expected to memorize that much material, but he does have a point.