When that Aprill, with his showers sweet, the drought of March has pierced to the root... 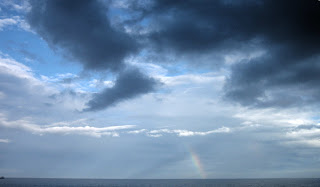 "April showers bring May flowers."  Or, as Geoffrey Chaucer says:

Whan that Aprill, with his shoures soote
The droghte of March hath perced to the roote
And bathed every veyne in swich licour,
Of which vertu engendred is the flour;
Whan Zephirus eek with his sweete breeth
Inspired hath in every holt and heeth
The tendre croppes, and the yonge sonne
Hath in the Ram his halfe cours yronne,
And smale foweles maken melodye,
That slepen al the nyght with open eye-
(So priketh hem Nature in hir corages)

It's also National poetry month.  What to do?  Well, try this: