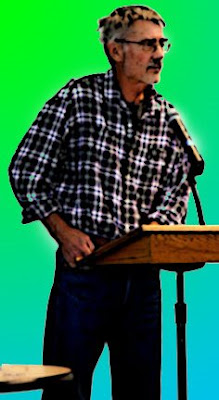 George Bilgere brings some pretty great poets to John Carroll (Billy Collins, Ted Kooser) and I do my best to get over there when I can.

This past September 30 Gary Gildner graced the podium in Rodman hall. I’ve got to admit, I am not all that well versed on a lot of the academic poetry folks around but I had heard of this guy before. His work is accessible yet technically tight. I can really appreciate a piece that transcends narrative without feeling the need to stab it in the back.

Gildner looks more like a retired cowboy than a poet. Tall and split rail thin, blue jeans, a striped long sleeved button shirt grizzled salt and pepper stubble. One could easily imagine him pulling up thistles in the corner of a pasture (part of a story he told in introducing one of his poems about coming face to face with a puma.) His demeanor was relaxed and somewhat soft-spoken with the comfort and sense of humor of a man who has achieved success in a field he loves. Having sold the movie rights to a novel he had written and subsequently buying a piece of a mountain with the aforementioned thistle bearing pasture he exuded the air of humility reserved for the truly accomplished.

To borrow an overused performance poetry term, Gildner’s “signature piece” is a short poem called First Practice. Gildner began his reading stepping away from the lectern with an explanation of the moment that inspired this piece – the first meeting of a newly formed 8th grade parochial school football team – and the genesis of the poem itself. Being a fiction writer he had made several attempts at capturing the moment in prose – each to no avail. Finally he made a list of all the most important images from the event. Looking at this list he realized he had written his first and arguably most celebrated poem of his career. I was heartened to hear this approach as it is a technique I use with students when teaching poetry writing – we start with lists all the time.

The relaying of this story though, took over twenty minutes and I was happy to hear him recite his first poem of the evening. I figured we were about to get into the meat of the reading but after the quick appetizer he began spinning another story explaining how a writers job was to translate feelings into words. In fact in over an hour of reading Mr. Gildner recited only six short poems. Mind that each was a wonderful piece with some of the best flowing of imagery I have heard this side of James Wright, but still at the end I felt a bit cheated. He weaved his poems into his monologue so that when they did arise they caught you a bit by surprise one or two lines into the piece like a trout taking a fly.

Like watching Michael Jordan playing minor league baseball, Gildner’s stories were better than everyone’s in the stands and maybe half the folks on the diamond but I couldn't help wanting him to air out another poetry dunk. His piece about a roofer watching a woman walk to her mailbox especially captured and magnified an instant into a revelation. And because of this I felt less than full after the reading. Not in the leave them wanting more way as much as the - is that all there is? - fashion.

Now, I did buy one of Gary Gildner’s collections in order to get to know more of his work, and having been to the reading I can hear his voice as I read the poems. But, it is just not the same as hearing the words from the author’s mouth. Perhaps this was his goal – though I doubt it. He did not strike me as one of those mercenary poets trying to push product – I think he just really liked to tell stories. To which I would reply, “Mr. Gildner, more poetry please.”

Posted by michael salinger at 12:14 PM