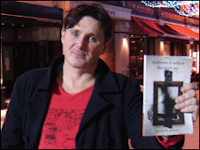 A poet
in Wales has been forced to launch his new collection in the street after a bookstore cancelled the event because of a campaign by Christian activists. Patrick Jones was due to sign copies at Waterstone's in Cardiff but the shop cancelled the event at the last moment. Christian Voice said the book was "obscene and blasphemous" and called on the chain to remove copies from stores.

The company said it was not a censor but felt it was "prudent" to cancel the event because of its duty to customers. "Darkness is Where the Stars Are" is a collection of 30 to 40 poems from the Welsh publishers, Cinnamon Press.

Mr Jones, the brother of Nicky Wire of the Manic Street Preachers, had been expecting to launch the book at the Cardiff Hayes branch of Waterstone's on Wednesday night. But a few hours before, the poet from Blackwood in Caerphilly county, was contacted by the company to tell him the event had been cancelled "to avoid potential disruption to our store". Read the rest here.

Does this sound like the 1950s or something? What does it say about tolerance and freedom of speech in society, whether it's in Wales or the U.S. that this kind of thing STILL goes on?

Wow-- makes me want to buy the book just to see what's in it that's so blasphemous! Cool!

Something similar happened this year in the Cleveland area - specifically a small bookstore in Lakewood. That was the week I wrote this poem:

Not sure why
Doesn't make much sense
Might have something to do with religion
Or the government.

Her friends Whore and War are welcome anytime
But if you see Kay
Tell her no way!
She can't come.

Most everyone else
Can come til they're dumb though.

A few other folks are welcome as long as
They wear the acceptable contextual clothes:

Dick Van Dyke
Can come as often as he likes
But buy him
Own him
Call him my Dick
And he's not welcome.

Billowy pussy willows
Can blossom and blow as they wish
But own one
Mention that "My pussy will O..."
You'll soon discover
That fair or bare or not
In this place
You're pussona non grata.

But if you see Kay
Tell her the powers that be
Have had their fill of her
And swill like her
Is barred from the menu
In this venue
By the men who'd rather
Go home and sin you
While warning a word like you
To not intrude on their poetry
Their peach
Pity free dumb of speech
In this low Kay shun.

Ah yes. More leaders distorting the words of Godly men for their own selfish gain. This is a TOTAL loss for true liberty and freedom. In order for a society to maintain its freedom, every citizen most be willing to defend each other's freedom, regardless of moral code. I can't be free if you aren't free. Lest we forget the words of pastor Martin Niemoller when with his poem he wrote:

I'm really intrigued to know what the censors and protesters found so offensive! I agree with Geoff--now I WANT to read his book!

And once again, the xtian xtremists get the opposite of what they wanted, because if not for their "protest" we would never have heard of this book here in Cleveland or around the rest of the world. They never learn, by protesting it, you give it the very exposure and audience you were hoping to prevent it from attaining. So thank you, religious right, for giving me another book to add to my next Amazon order...

I'm as against censorship as anybody, and I don't agree with Christian Voice's reaction (i.e. asking the bookstore to ban the book), but the fact that Patrick Jones emailed his poetry to groups he specifically knew would be offended by his work... well, that amounts to a stunt, doesn't it? I'm not a fan of fabricated controversy, personally. I've been hard-pressed to find excerpts of his poetry, but what I was able to find, I'm not all that impressed with:

Ya know – I’m always a bit cautious when these “freedom of speech” issues come up. There is a difference between being censored and being asked not to use the word mother fucker in a family bookstore. Usually the resorting to such language is a lazy attempt to shock in this increasingly unshockable world more than it is any reflection of “keeping it real”

This example seems to be right along this line – a direct attempt to offend rather than educate. Not that being impertinent is not a talent or even an art – but, if one sets out to shock and offend – then one should not cry foul when the reaction is shock and offense.

There is a debunked linguistic theory that has been floating around the past couple decades known as code switching which tried to elevate crass language by suggesting the folks using it were able to switch from one level of discourse to another – speaking one type of English on the street and another in the business arena and another in the halls of academia. In actuality – while all folks who communicate are (or should be) using some sort lens appropriate to their audience this line of thought has been outted as nothing really more than an excuse for those who never do bother to elevate their discourse or have found they get more attention by using a baser grammar and vocabulary than the occasion and circumstances would seem to deserve.

It’s like the kid in school who tells you he could get good grades too if he wanted, but never does – saying that good grades show one is a suck up. He is blowing smoke to cover his lack of preparedness – or he is purposefully “acting dumb” – either tactic is the height of cynicism.

This is how I see this current example – sort of a I could of if I wanted to scenario set up by purposefully trying to offend – succeeding in offending – getting banned from reading – getting more publicity due to the banning – and escaping from showcasing inferior work.

Smacks of “emperor’s new clothes” syndrome as well which is, IMHO, unfortunately not all that uncommon in the poetry scene.

The original article piqued my interest in reading Patrick Jones' work - but the follow-up article and (especially) the excerpt of his poetry have taken away a large part of that interest.

I have no objection to "dirty" words or even having Jesus fuck anybody he likes. But what I find most disappointing (and obscene) is that Mr. Jones' "blasphemy" and the subsequent "furore" apparently come unaccompanied by good poetry.

Always multiple sides to any story....

According to the website of Patrick Jones' publisher, Cinnamon Press, Jones was in an ongoing dialogue with Christian Voice before the book launch at Waterstones was even planned. He began his correspondence with them after Stephen Green of Christian Voice made public homophobic remarks. If this is so, it doesn't appear that Jones deliberately tried to stir up controversy to promote his book.

But I think this is neither here nor there, as is the quality of Jones' writing. Christian Voice is an extremist hate group that threatened public protest and disruption if Jones read at Waterstones. The bookstore caved. This is despicable whatever Jones did or didn't do, and whatever anyone thinks of his writing.