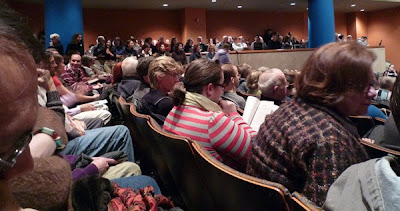 When
was the last time you had to worry about the Fire Marshall at a literary event due to crowd size?

I recently attended an appearance by Sarah Vowell in conjunction with the Cleveland Public Library’s Writers and Readers Series and there was an overflow crowd in the Lois Stokes Wing Auditorium. Now fans of Ira Glass’ This American Life would recognize Ms. Vowell’s voice – as Ron Antonucci mentioned in his introduction of the author voice is taken in both classifications here, writing and spoken. The humorist is a bestselling author, contributing editor to the NPR program This American Life as well as the voice of Violet Parr, the teenage super hero daughter in Pixar’s academy award winning animated feature The Incredibles. 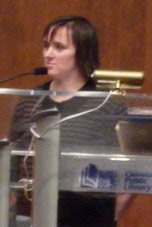 Before she took the stage the standing room portion of the crowd (itself a hundred strong) had to be reseated outside the auditorium where they viewed her very entertaining presentation via closed circuit television. It was nice to be a part a large gathering of such literary intent. It’s not often you hear Marge Piercy’s name dropped in conversation by the folks sitting behind you (even if it was in error – the couple were actually trying to recall Margaret Atwood’s name – she an earlier speaker in this series.)

Vowell took to the stage first reading from her latest work The Wordy Shipmates a book about the Puritans and their trials and tribulations in a new world. She’s short with cropped straight dark hair, almost anti fashionably dressed in that artsy too cerebral to worry about it kind of way and speaks with the deadpan voice of an extremely precocious little girl with perfect enunciation. 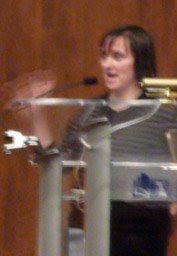 Now, one might not think that Puritans, the assassinations of US Presidents, U.S. election history or radio are the usual subjects of humor, but Vowell succeeds. The selections she read were clinically precise in language and description. In fact, her humor is derived from the almost over exactness and factuality of her prose. Delivered with a pokerfaced self effacing affect she had the audience busting a gut over subjects as diverse as the Magna Carter, the King James Bible and President James A. Garfield’s tomb.

She kept her set list of excerpts to read scrawled on the palm of her right hand which she glanced at occasionally as she moved through her set confidently while never appearing smug or too “smarty pants” as can happen when the subjects are research heavy. Vowell then took questions from the audience. When asked what she went as for Halloween, she replied an author on book tour – rings under eyes, wrinkled clothes, suspect odor…

There were no bad smells associated with this event though.

Kudos to Cleveland Public Library for this series, earlier this year I saw national Book Award winner Sherman Alexie and I am looking forward to more events at The People’s University. Oh yeah, this and the rest of the Writers and Readers Series is absolutely free. 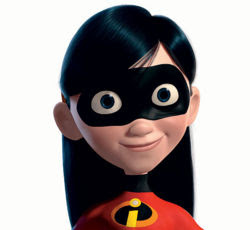 Posted by michael salinger at 6:56 PM