I wasn’t expecting the place to go topless. Swung by the Lix and Kix set last night. This reading series will soon be celebrating its one year anniversary 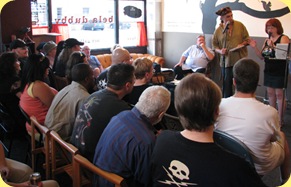 The monthly series has migrated around town a bit and has alit at Bela Dubby – a coffee shop/tavern/art gallery at 13321 Madison Avenue in beautiful Lakewood Ohio. Fliers say the show starts @ 7pm and the two effervescent hosts John Burroughs (aka Jesus Crisis) and Diane Borsenik got the thing rolling in front of a packed house of fifty or so just about on time. I say just about because the evening began with twenty five minutes of announcements. I wouldn’t recommend coming late to miss these preliminaries though if you hope to get a seat. I got lucky and found a single seat up front between Kathy Smith and some cat wearing a shirt with the mathematical symbol for pi on it. 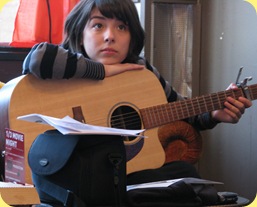 One of the things I enjoy about this series is on the couple occasions I have been able to attend they have mixed some music in with the readers. This evening Leah Lou, a precociously adorable singer songwriter opened the evening. Her voice comes across in a familiarly quirky and neo folk kinda way. Not being up on the names of all the contemporary practitioners of this genre I am at a loss to make an accurate comparison and will date myself by saying she reminds me of Melanie Safka. Her lyrics showed a healthy dose of self deprecating humor as did her easy stage presence. Definitely one of those folks that causes one to turn to their neighbor and say, “she’s just as good as…” 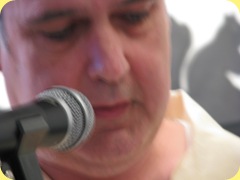 After the young lady finished her set Russell Vidrick took the mic. I’ve been seeing this guy around town for the last twenty years or so and the only thing that has changed about his hangdog look and deadpan delivery is possibly the addition of two or three gray hairs. This Cleveland poetic staple also hosts a second Saturday series at the Brandt Gallery in Tremont. Vidrick‘s set produced a déjà vu experience. I turned to Kathy and asked, “Maybe it’s just me – but is this the only poem this guy ever does?” Kathy said that he was stringing together several pieces but I felt sure I had heard all of the pieces he was doing the first time I saw him read a couple decades ago.

Even though I felt I was able to anticipate all of Vidrick’s punch lines, his reading was enjoyable and short enough to leave you wanting to hear more (a talent any poetry presenter would do well to cultivate.) If indeed Russ was stringing together several pieces I would have liked to know when one ended and the next began.

Leah Lou came out – did another quick four or five piece set and then disappeared into the night because her boyfriend had to go to work. 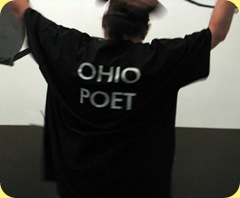 This evening the crowd celebrated Burroughs’s birthday. Unbeknownst to Jesus Crisis, his partner in rhyme had solicited lines from the far flung poetry community who have interacted with her co-host and assembled them into an epic approaching bit of verse. Dianne presented the poem, framed for display, to our surprised man of the hour and then read the two hundred plus line piece. A representative from the Ohio Poetry Association also gave our guy a t shirt proclaiming the wearer as an Ohio Poet. Egged on by the crowd John did a quick hootchie cootchie and donned the top. 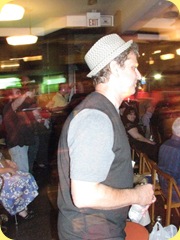 The final feature spot of the evening was filled by California bartender/poet David Smith nom de plume Handsome Duke Deal. I knew I would have to hit the road right after his set so I moved over to the bar area bequeathing my front row seat to Terry Provost. Smith took the mic and informed the crowd that he had passed up a trip to France to come to Cleveland. The woman at the bar next to me and I instantaneously exchanged dubious looks. It is not beyond the pale to question the sanity of such a decision. Smith’s reading offered no confirmation of mental liabilities though.

This “outlaw poet’s” work came across as a well crafted mixture of wit and observation. He even threw in a piece about transvestites in Cleveland as well as one ruminating over a visit to Lakeview Cemetery. He read mostly from his new collection White Time published by Off Beat Pulp of Kansas. Here is an excerpt of his piece

GENOCIDE SUTRA - A LOVE POEM from the collection:

1.
With ruby hearts at stress,
we march hand wrapped in hand
through the infamous gates
across the broken tracks
and into the empty yard;
where evil screamed,
and the devil harvested
the vineyard of the damned.

Auschwitz
there is no pleasure in yesterday.

Auschwitz
this little terror at the ass-end of the world. Truly.
The memorial here is an antiseptic lie.
An anemic and sterile victims' dude ranch.
Diluted. A soft and incomplete fable.

Auschwitz
when you sleep with Dr. Mengele
you always sleep alone. 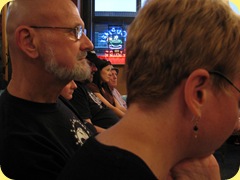 After Smith’s reading I unfortunately had to hit the road and missed the open mic. Lix and Kix the next installment is October 20 featuring broadside poet extraordinaire Ralph Lacharity. I recommend getting there early. 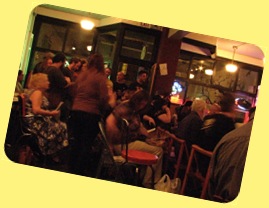 Posted by michael salinger at 10:33 AM

Thank you, Michael, for your enjoyable, balanced, well-written review and your excellent photos! Above all, thanks for your presence. Even though my birthday isn't officially until the 17th, this already ranks with my best ever.

As you see, we're better about starting on time than we were last year. Generally, I would sprinkle the announcements throughout the evening more so folk wouldn't have to swallow so much at one time. But Leah'd gotten hung up at work and had to arrive slightly late, so....

What Russ read was indeed a "rhapsody" of numerous pieces from various eras of his poetic career - some I recognized from his and Jim Lang's joint chapbook Duelling Poets, a couple others I recognized from open mic readings, and some I'd not heard before. Though I would have liked the opportunity to applaud his individual poems, I was impressed by the way he seamlessly and innovatively strung them together - he made the new(er) pieces seem like old friends and I thought his rhapsodic context breathed new life into poems that were indeed old friends. Then again, I haven't had the benefit of being acquainted with his (or any other Cleveland poet's) work for twenty years. ;)

The gentleman from the Ohio Poetry Association is Michael Schurch from Marion. And I believe Brian MacDougall was the one wearing the Pi shirt. Nice to see folks from Ashtabula, Mansfield, Columbus, Toledo, Detroit, and especially Cleveland in attendance! And the collaborative poem (to which over 100 poets contributed) is one of the best birthday gifts I've ever received. I thoroughly enjoyed Leah's, Russ' and David's featured offerings - as well as our somewhat longer-than-usual 30-poet open mic. But "the best part of the trip" (to steal a phrase from another L.A. poet) was the love and friendship I felt coming from most everyone in that room. Thank you all!

Thank you so much, Michael, for the great photos and the wonderful review of last night's Lix & Kix show. We had a blast, and I think everyone else did, too! Our features and our audience were outstanding. My husband said the headcount was 72 at one point, early in the show. The vibes were fantastic!

As John has pointed out, we were biding time with the announcements, as I had phoned Leah and knew that although delayed, she was just minutes away from arriving. So we improvised! We've been striving to get started on real time, not poet time, lol. ;-)

I'm working on a blog about the show- stay tuned! And thank you EVERYONE!

And I just "relaized" I mispelled realized. A temporary case of dyslixandkixia!

Thank you very much. I had a grand time at Lix & Kix and do truly love Cleveland, my Paris on the lake. I'll be back in November at the Lit in Tremont, reading witht he one and only Scott Wannberg.

I've just posted video of Russ Vidrick's featured reading at Lix and Kix in the Crisis Chronicles Online Library. It's about ten minutes - just under the maximum length You Tube allows for uploaded videos - so I didn't have to chop it up into individual poems as do with my footage from most of our featured readers. Clips from David Smith's reading and Lou's performance will be coming to Crisis Chronicles in the (hopefully) near future.

Coolness on all fronts. I thought one of the best events in a while!

Here's a link to the Puddinghouse press explanation of a broadside:

But basically they are pieces published as single sheets like posters if you will, with a particular attention paid to visual aesthetics. Local poet Chris Franke would fall into the category of broadside poet in my mind. He is handing out single sheets of work all the time - I think Bree has published some too outta Green Panda.

It should also be noted that broadside refers to a form of transmission rather than a form of poetry.

thanks, Mike, but what i was really wondering is why you'd
call Cinci's Ralph La Charity a
"broadside poet extraordinaire" - are you infering he is a visual hand-out sort of versifier (a la Cleveland's Franke), as opposed to someone more oral and performative (such as yourself)?

It's not all that thought out - I called La Charity a broadside poet because the last time I saw him he was handing out broadsides of his work.