Look out for the Bats! 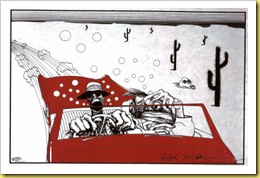 Mac's Backs and Visible Voice Books in Tremont have collaborated on a weekend of readings for the last few years honoring influential writers. We inaugurated the events in 2007 for the 50th Anniversary of the publication of On the Road by Jack Kerouac. Last year we chose Charles Bukowski.

This year we are focusing on the work of the irrepressible, irredeemable, intoxicating, incomparable and intoxicated Dr. Hunter S. Thompson. The author of Fear and Loathing in Las Vegas pioneered Gonzo journalism, the art of using yourself as a character in non-fiction with some outlandish embellishment. A good deal of his most accomplished work appeared in Rolling Stone Magazine in the 1970's. His first article for Rolling Stone was also one of his best--Freak Power in the Rockies--- detailed his run for sheriff of Aspen, Colorado.

Thompson originally published an account of the Hell's Angels in a story for The Nation in 1965. He expanded it into a book after living with the motorcycle gang for a year and published Hell's Angels: The Strange and Terrible Saga of the Outlaw Motorcycle Gangs in 1966.

His gonzo writing have been collected into four volumes, including The Great Shark Hunt and Fear and Loathing on the Campaign Trail, documenting the1972 presidential campaign.

Choose your favorite Hunter S. Thompson excerpt and read at Visible Voice on Friday evening, September 25th or the Barking Spider Tavern (11310 Juniper Rd on the CWRU campus) on Saturday, September 26th from 4-6 p.m. Books will be available. Bottoms up!


Posted by michael salinger at 8:41 AM

YOU PIPSQUEAKS!!!!! HST would have blown you up, collected the ashes, rolled a combo spliff...AND SMOKED YOU!?!?!
Congratulations on holding this event.....keep on chooglin'!!!

And he wouldn't have been Anonymous. :0)

The Great Shark Hunt is an amazing collection. Never quite made it through Fear & Loathing on the Campaign Trail, though.