Winter’s been laying low so far this year but it has finally started sending out scouts. The kind of wind that immediately changes the pressure in a room swooped onto the north coast yesterday. I had to fight with the steering wheel of my toaster inspired Honda Element  to keep the green box on the road as Sara and I drove to Cleveland Heights to catch the December edition of the Macs Backs Wednesday reading series.


The estrogen enhanced trio of features this evening were T.M. Gottl, Sammy Greenspan and Gina Tabasso.  Suzanne – proprietor of the book shop – got things rolling by welcoming folks to the reading and then taking suggestions from the readers and audience as to what order the poets should present their work. After an overtly civilized deliberation – alphabetical by last name was chosen.

Ms. Gottl opened her set by thanking the crowd of about twenty five for braving the howling December winds in order to attend the event. She read from her book Stretching the Window as well as some newer work which I noticed was still marked up with revisions on the page. 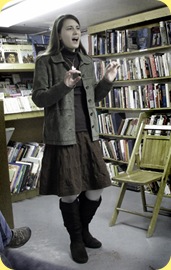 Much of the work Gottl presented this evening would fall into the realm of list poems if I were to be bold enough to categorize her poetry. Rich complicated and occasionally complex imagery, lotus blossoms making an appearance in a couple of the works. Stuff one might like to hear a second time . I consider this a good thing considering how many times I have been to a reading and wished I had the time back after listening to some pieces for the first time. She introduced her piece Throwing Rocks by talking about how interesting she found it when people offered up interpretations of her poems. How sometimes she was surprised by the meaning others attached to her work.


This is something to be expected when one threads images like popcorn on string for a Christmas tree. I found myself thinking about a documentary about the Jonestown suicides when she mentioned the smell of almonds (an odor I learned from the show very similar to cyanide.) Absolutely nothing to do with her poem and an idea lasting only a nanosecond – but this is the type of gut interpretation one inspires with a shower of images that are capable of soaking narrative.

Sammy Greenspan began her set with a piece of hers from an anthology of work inspired by Bruce Springsteen eliciting a hearty whoo hoo from a fellow fan of the boss afterwards. She than read a piece about peace coming ashore in Cleveland “dripping oily footprints”  as it walks through town “measuring our compassion in loose change” 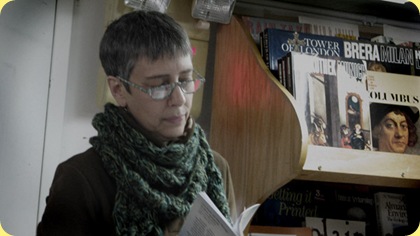 Greenspan’s work came across more narrative in nature than the preceding reader. One piece she read about death though, I thought carried the story on maybe a stanza too long. Or rather her ending line appeared too soon in the work – one of those aha moments that one looks for in a poem that invites the reader to linger a bit but is pulled away like subtitles flashing by too fast in a foreign film. 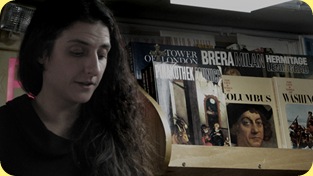 The final featured reader of the evening was Gina Tabasso who predictably opened with an equestrian themed poem. Anyone familiar with this woman’s work knows to expect equine oriented verse. This though, she informed, would be the only horse piece of her set and switched up a bit continuing by introducing what she termed as vignettes – snapshot writing. This plucked a chord with me because it is what I stress when teaching poetry, the capturing of an instant. 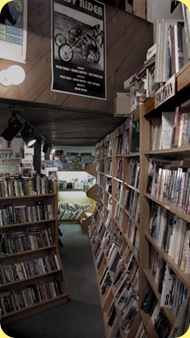 For me, this evening, Ms. Tabasso captured that just right balance of figurative language and story. I was particularly taken by her piece about a ballerina juxtaposing the art one sees onstage with the pain suffered in years of rehearsal by the artist. Her reading style was classic, even paced, dropping a bit at line breaks. She buffered the poems she presented with stories that didn’t so much explain the poem as the impetus for their genesis. Snippets about her grandfather and her visiting Rockefeller Greenhouse or her leading a lame horse back to its stall related in that casual way encouraged by the comfortably low ceilinged venue.


After the featured readers there was an intermission and Sara and I took the opportunity to sneak into Tommy’s next door for a snack before braving the blustery night for the drive home. Bellies full of humus and meat pies and our  minds rolling over the reading we had just been to we pointed our tires home – managing to keep the toaster on the road the whole way.

Posted by michael salinger at 9:22 AM

my personal favorite of the evening was Sammy's poem about OH. And I very much liked the snapshots. Once again, thanks to Suzanne for orchestrating a warm and welcoming event (on such a cold and blowy night).

A superb poetic line-up! I very much wanted to be there - but unforeseen family needs diverted me.

I appreciate the time and effort it takes to write these reviews and for the awareness and attentiveness of the reviewers. (in this case Michael Salinger)

And as always, thanks to the Therese, Sammy and Gina who brought their words, personality, grace and good cheer to Mac's basement.

And thanks to you and Sara for coming out last night!

It was a lovely, cozy evening, indeed.

Great review, Michael...makes me sad I did not make the event.

Was so glad to be able to make this event and hear these three great ladies read.

Was a cold blustery night but it was well worth the trip...