The Poetry of a Political Speech 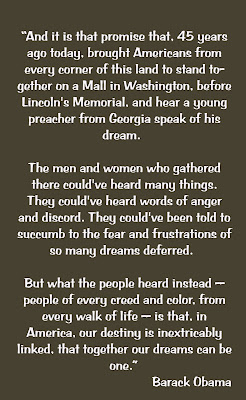 Why is a good speech like a poem? John Lundberg, a writing and teaching fellow at Stanford University makes a great analysis in this essay on Barack Obama's acceptance speech.

The Poetry of Political Speech. He cites the rhythm of language and one of my favorite books, Mary Oliver's The Poetry Handbook. In that book (which as a lyrical poet, I LOVE to cite) she builds the argument that free verse evolved out of rhythm, rhyme and other classic conventions and without knowledge of the rhythm of language, a poet cannot successfully compose free verse.


Lundberg then notes the poetical use of refrain, of the ability to build momentum in Obama's speech.


But Lundberg also writes that he'd listened to Obama's acceptance speech and heard him quote the Bible, but no poets. The fact is, Obama referenced Langston Hughes, but he did it without saying his name -- just as he spoke of Dr. Martin Luther King, Jr. without naming him. In so doing, Lundberg missed the most poetical part of the speech -- the subtle ability to say without saying.