Bringing Out Your Big Guns 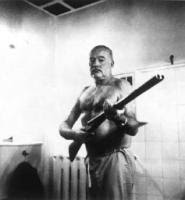 On the Beatnik trail in Mexico City

Every librarian is caught between "two mythical places—the Perfect Library of God and the Infinite Library of Babel, the one transcribed by Jerome, the other by Borges.”

As the first president of the EU, Herman Van Rompuy has struggled to make his voice heard on the world stage. But as "Haiku Herman", the writer of poetry covering topics from mating toads to birdsong, the understated Belgian's voice finally emerged yesterday with the launch of his first body of work to an expectant audience.

For three years, Paul Harding’s unpublished novel, “Tinkers,’’ sat in a drawer. The writer, a former Boston rock drummer who grew up in Wenham, had tried selling it, but nobody was interested.

“I thought, ‘Maybe I’ll be a writer who doesn’t publish,’ ’’ Harding, 42, said this week, a day after “Tinkers’’ earned him the Pulitzer Prize for fiction — the first book by a small publisher to do so in nearly three decades.