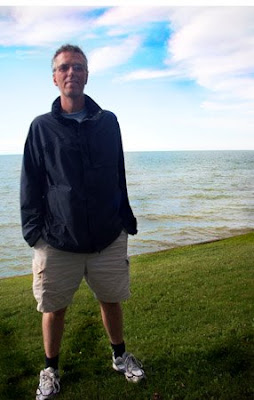 Range: Brandt Gallery, Borders Strongsville, The Literary Café in Tremont, the Water Street Gallery in Kent. Previously spotted in venues from Mac’s on Coventry, and the Kamikaze Coffee House to various libraries, including Cleveland Main, Cleveland Heights, and Lakewood. A wide range of disappearing and ecologically endangered habitats from the Beachland Ballroom, to the Bookstore on W 25th, to Brady’s Cafe.

Distinguishing Markings: “Compassionate Imperialism (and its “links to terror”).

If the Elm Deserves to be Paid

Were the elm to be paid the fair worth of its shade
or the apple so paid for its fruit
the ocean rewarded for swimming
the air for the song of the flute
the sun to be paid for its cascading shine
the dream reimbursed for its calling
the spin of the globe for the keeping of time
the vault of the sky for not falling,
if the wood and the stone earned a lien with each home
and each kiss paid its tax to the moon
if the hope in each heart mailed its dues to the stars
and love took its tithe from the blues,
there'd be nothing but thanks to be kept in the banks
empty safes stuffed with memories of gold
and the armies of war, unmanned and ignored
could be fabled in stories untold.

Posted by michael salinger at 7:06 AM

I love this dude - truly.

This poem is great, I love when details are turned inside out like this, thank you
-TAG

I agree that this is a beautiful little poem. Until now, I've only been familiar with Terry's enthusiastic live performances, which I've always enjoyed as well.

A couple of months back, Terry did a performance of "General Petreus, let us know: Should We Surge or Should We Go*" at the LIt Cafe, and got all the drunks in the audience to stamp their feet along with the lyrics. As I've said probably countless times, I usually don't like political poetry (usually because it's simplistic-- and that's the ones that I agree with)-- but I have to say, that performance really rocked-- it was the high point of the evening, and that's saying a lot because it was a good evening.

(he did the same poem again at the Deep Cleveland, but absent the drunks stamping their feet, it felt a little flat. I guess that setting is everything.)

To the tune of The Clash's "Should I Stay or Should I Go," , from their album Combat Rock

I love this poem, Terry -- both of you are a worth beyond measure.