This
sort of plays along with all the discussion revolving around form and what constitutes a poem.

I think one of the themes that I have heard reiterated a couple times is once we decide to define groups of words as poems, haiku, sonnet, whatever - then the very labeling creates exclusion and everybody should be against exclusion. Bring grammar or syntax into the equation and one becomes downright draconian. 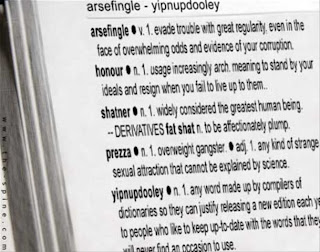 I’m very interested in this train of thought as I am currently writing a teacher’s text book on vocabulary acquisition – which if we take the former argument of bothering to define anything as being some form of elitism may be futile.

Personally I find this line of reasoning akin to watering down pitching in the major leagues, but that’s just one shmo’s opinion. Here's a news item that I feel fits into this discussion.

LONDON (Reuters) - Embaressed by yor spelling? Never you mind. Fed up with his students' complete inability to spell common English correctly, a British academic has suggested it may be time to accept "variant spellings" as legitimate.

Rather than grammarians getting in a huff about "argument" being spelled "arguement" or "opportunity" as "opertunity," why not accept anything that's phonetically (fonetickly anyone?) correct as long as it can be understood?

"Instead of complaining about the state of the education system as we correct the same mistakes year after year, I've got a better idea," Ken Smith, a criminology lecturer at Bucks New University, wrote in the Times Higher Education Supplement.

"University teachers should simply accept as variant spelling those words our students most commonly misspell."

To kickstart his proposal, Smith suggested 10 common misspellings that should immediately be accepted into the pantheon of variants, including "ignor," "occured," "thier," "truely," "speach" and "twelth" (it should be "twelfth").

Then of course there are words like "misspelt" (often spelled "mispelt"), not to mention "varient," a commonly used variant of "variant."And that doesn't even begin to delve into all the problems English people have with words that use the letters "i" and "e" together, like weird, seize, leisure, foreign and neighbor.

The rhyme "i before e except after c" may be on the lips of every schoolchild in Britain, but that doesn't mean they remember the rule by the time they get to university.

Of course, such proposals have been made in the past.

The advent of text messaging turned many students into spelling neanderthals as
phrases such as "wot r u doin 2nite?" became socially, if not academically, acceptable.

Despite Smith's suggestion, language mavens are unconvinced. John Simpson, the chief editor of the Oxford English Dictionary, says rules are rules and they are there for good reason.

"There are enormous advantages in having a coherent system of spelling," he told the Times newspaper. "It makes it easier to communicate. Maybe during a learning phase there is some scope for error, but I would hope that by the time people get to university they have learnt to spell."

Yet even some of Britain's greatest wordsmiths have acknowledged it's a language with irritating quirkiness. Playwright George Bernard Shaw was fond of pointing out that the word "ghoti" could just as well be pronounced "fish" if you followed common pronunciation: 'gh' as in "tough," 'o' as in "women" and 'ti' as in "nation."

And he was a playright.

Posted by michael salinger at 6:08 PM

Having always been one of those straight-A students in school, I want to say that we need uniform language rules, blah blah blah...

But isn't language, after all, a spoken phenomenon first, a written one second? (As poets, we're also acutely aware of the spoken aspect of the language, not just the words on the page...) And only in recent history have we even tried to nail down really specific language rules regarding grammar and spelling, etc. By doing so, it seems like we're artifically restraining the natural evolution of language. Here in the era of texting and electronic communications, it will be evolving faster than it ever has...whether the rule-writers like it or not....And I know that Germany has recently issued new sets of "rules" regarding certain spellings and grammar rules for the German language. Will we eventually need to do that in English too? Americans already dropped the "u" in words like "colour" and "favourite" because one of our past presidents decided those words were too hard to spell....

reminds me of ebonics.
eubonics? how do you spell!!?

i am all for mispellings in poetry or literature if done on purposefully and well. for the sake of dialect, or as shorthand...if an author is consistent he can pull it off.

but in the classroom i see no reason to tolerate any but the correct spelling and grammar.

i read something---some novels have become bestsellers in japan---written completely on blackberries, in pc pigdin!

Jumping off of what bree said, as a teacher in a two year university, I think the issue is one of context. An academic essay is not a blog is not a text message, and they all have different standards and rules. When a student signs up for a course, he or she is essentially saying that they will abide by and be judged by certain standards appropriate for academia or the university.

One issue tangental to this is the consumer mentality many students approach education with--they pay for a class, therefore they have bought a grade, and see no need to earn it. This is not a universal truth, but it is a pattern many teachers are combating currently. The logic follows that if they and their friends understand what each other are saying, there is no need for students to follow certain academic rules--that isn't what they paid for, etc.

Underlying this whole discussion/debate is one that questions the general purpose of education, colleges, etc. What is the purpose of education? Why is it necessary for students to go to college? What should they expect to receive from 2 years or 4 years at school.

Hard for me to get into this discussion again without a disclaimer. When I advocate a view, I'm kinda like a pit bull. I often feel shame about what I've said or thought because I too often hurt people with the bluntness of my assertions. My excuse is too often 'truth' but my motivation 'ego.'

Yes, context is ever important. & standards are guidelines that create a common context of traction through the world o ideas. Yet I get hackles around rules. I'm frightened lest they constrain me from creating my best me.

Education is a tricky thing. On the most basic level, I don't want to tear down universities. They are practical agents with which people empower themselves in society. However, universities do abuse their societal function and collude with power. I'm not a blind believer. And I don't believe clergy or credential necessary in the realm of absolute truth.

I also believe in the innate worth of idea even if it cannot be articulated perfectly.

I don't have time to make a long comment (hold the applause, please!). Just want to say I think Theresa and Lady have made some very good points. I can't help but think that without language evolution (and rule expansion or breaking) we'd all be writing like Chaucer. Shakespeare, Milton, Pope, Whitman Dickinson, Byron, Pound, cummings and Daniel Thompson would not exist. For that matter, Chaucer would not exist - because he was an evolution from Dante and others, who evolved from Vergil and Sappho and Homer, who evolved from who knows who. Thou shalt evolve should be the mantra of all poets (and humans), in my humble opinion. Its only natural. Holding back evolution is unnatural and creatively stifling. On the other hand, I think one should know the rules and understand them before one condemns and dispenses with them. Breaking artistic "rules" is cool. But we should do it intelligently and not just be rebels for the sake of revolution.

To varying degrees I think each of the poets who've commented before me have broken "rules" intelligently (and I define "rules" broadly here) - but they've also been informed by the rules. I think a smart balance between rule and revolution is essential - and leads to evolution and some excellent, meaningful art. We don't need another DaVinci, no matter how good he was. We already had one. But we do have needs. let's meet them.

Break rules as you like. Try to be comprehensible! Otherwise, you might as well be writing for yourself and no one else. Then again, that's a disposable rule, too. After all, there's nothing wrong with writing for oneself.

>I also believe in the innate
>worth of idea even if it cannot
>be articulated perfectly.

Most teachers that I know will grade on both content and form. In other words, students get credit for their ideas even if their spelling or grammar are off.

However, a student does have certain responsibilites to use the tools available to them to improve their writing. So, for example, if a student has an issue with spelling, there are free tools available for them to use through the University to improve this; at least there are at Tri-C. If a student refuses to take advantage of these tools, are they ready or willing to participate in academia? Students who pay a college for an education are, in essence, agreeing to participate by that institution's rules and guidelines, which would include standard spelling, grammar, mechanics, and language choice--some institutions even have a printed list of rules that one must agree to follow. If they are not willing to follow these rules or standards, they should receive their education elsewhere.

>On the other hand, I think one
>should know the rules and
>understand them before one
>condemns and dispenses with them.
>Breaking artistic "rules" is
>cool. But we should do it
>intelligently and not just be
>rebels for the sake of revolution.

I think the issue here is that it's not necessarily rebellion in the class room that leads to bad spelling, but ignorance or even laziness.

Good point about ignorance and laziness being big factors as well....

I'm a rebel without a cause

Lady said...
>I'm a rebel without a cause

If you ignore grammar, you'd be a rebel without a clause.

And if you ignore punctuation, you might be a rebel without a pause.

I hope they know this already, but in case it's not clear, I wasn't referring to folks like Bree and Lady who rebel intelligently, brilliantly - who know the "rules" but know how to transcend them and/or create their own better, more liberating set of rules. :) I was referring mostly to my old, youthful poetry, (and I'm sure there are many folks who are where I was), where I thought defying convention and being novel was enough to make me a valid or great artist. Sometimes I used incomprehensibility to create a sense of mystery and disguise my ignorance - without really understanding what I was doing or why. Now I look back at that crap I wrote years ago and am aghast.

as an editor i get all sorts of submissions--you'd be shocked how many misspell or fail to punctuate.

i always ask--did you intend this misspelling? did you not want a period here, even tho you got one at the end of every other sentence?