If a tree falls in the woods and no one's there to hear it... 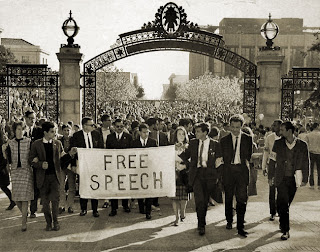 In the past,
I've mentioned in passing what I think poetry "should be". Having just wrapped up another year's work on an annual concert/art fest/cancer benefit in which I'm involved every September, I've seen first hand how art can be used in service of a cause. Even Cleveland's poetry community has organized benefit readings, like the one Bree hosted to benefit the Lost Boys here in Cleveland. Art in general--I think--should eventually serve a cause beyond itself.

For example, love him or hate him, you can't deny that Bono has used his music (and the international fame he's gained through the music) to draw attention to issues like world poverty. I think that art exists for more than just itself, even if that "other" purpose is nothing more than drawing a couple people together, opening one person's mind to a new thought, communicating, connecting. And if the artist has the opportunity and ability to go beyond that--enacting societal change, awareness, enlightenment--doesn't he have that obligation to do so?

In the past, when I've stated that opinion, many people have disagreed, arguing (and I'm paraphrasing here) that poetry should be for love of language, for the artist, for the sake of the art and nothing more. But isn't art communication? If there is no one to whom the artist wants--or will allow--the art to communicate, is it even art? Is a poem that's written and hidden in a drawer, never to be seen or heard, a poem?

So I really want to know, in your mind, what "should" poetry be?

Posted by Theresa Göttl Brightman at 11:08 AM

I agree with much of what you've said and I've often contemplated the thought about poetry that Phil Metres has posted atop his blog: "Not 'is it good?,' but 'what has it accomplished?'" It's wonderful when art serves a good cause. But I might argue that the mere act of making art has creative effects - even if it has or finds no audience. For one thing, folk engaged in art are far less likely to be found toting weapons into mindless war (though, as with anything, I suppose there are exceptions).

I think about Bono. He and the members of U2 have been influenced by other bands and historical events - some of which were not so socially conscious. But one could argue that without those influences, they would not be the band they are today and he would not have (or be exercising) the influence he has as a result. So even those less socially-conscious influences are indirectly playing a role in his good works.

Some of the most socially conscious poetic words ever written came from the pen of John Donne: "No man is an island" - "ask not for whom the bell tolls, it tolls for thee." Yet, if I recall correctly, Donne's poems weren't published 'til after his death. And what about Dickinson and quite a few others? Though their works were largely unseen/hidden during their lifetimes, what they wrote - stashed in a drawer or not - was indeed poetry. No one may have seen the tree fall in the woods. But millions have walked into the forest after the fact and stumbled upon and admired these fallen trees. And their seeds have taken root and led to new trees. I'm a firm believer that all creative endeavors - even ones that end up in a drawer for years (or even in flames) create ripples of effect. Perhaps the effect will only manifest itself within the poet. Maybe we'll never know what effect our works and being have - anymore than a pebble dropped into a pool knows where the ripples it causes will go - or anyore than the moon is aware of the tides it causes on earth by simply being where and what it is. But if we are poets/artists and we create, I am certain we will have an effect somehow, somewhere....

IMO, the animal-level function of art & poetry is to serve as a glorified mating call.

If art *does* serve multiple purposes, great. But I don't think it *must*.

I'm resistant to 'should', more amenable to 'could.'

"[T]he animal-level function of art & poetry is to serve as a glorified mating call?"

I've never thought of it that way. But now that you've pointed it out - I think that's a brilliant insight!

I've had a couple go-'rounds with poetry in my half century plus, and there's no doubt that it's been a mating call at various periods in my life. I see that as a piece of a broader function.

There's probably nothing that any of us do in life that isn't driven by some human need. So I suggest that we write in an attempt to meet our unmet needs. Different needs come into play for different people at different times.

In a general sense, and this is a piece of what John expressed so well, we're happier, more productive, and better able to be peaceful, contributing members of our communities, small and large, when more of our needs are met. So I believe that the poem in the drawer that is never read by anybody is good for all of us. Growing up, my kids got the direct benefit of poems they never read simply because the act of writing those poems made me a more emotionally available mom.

Personally, I'm not sure whether I could, would (or should) write if writing carried any sort of obligation. Poetry attracted me in the first place because it acted as an open field of permission where I could express anything in any way that I pleased, and share or not share as suited my needs in the moment. Like most people, I have a lot of obligations in my life. Poetry is a place where I have none, and I like it that way.

Words have weight no matter how they're used .... or stored.

But the right words?

If I couldn't write...I'd shrivel.

I'm all for art for art's sake.

If it also serves a greater good...whether while the author lives or after they move on....

i don't understand why so many folk keep trying to say what something is or isn't - especially art and poetry. just because it is one thing to that person does not mean it must be seen that way by another. as far as i'm concerned, it's "All Of The Above".

no on sees, hears, thinks, does the same way as another. what works for you is fine as long as it does not hurt or impose upon another.

art is big. art is small. art is important. art is useless. art is public. art is private. art is universal. art is individual.

people who say it is one thing are like the 4 blind men describing different aspects of the elephant. none are correct, yet all are right.

I believe a poem in the drawer is like a 'lamp under the bed'... not intended to be there. If we have a gift in life, we're not meant to bury it, but to use it and cultivate it; for our growth, but mostly for the love of others. We never know who's listening. It's probable that a few or many tune in and the art/poetry speaks to them, even more than it spoke to us.

I think some of my best poems are ones I planted in a drawer for 15 or 20 years and then dug out and cultivated using tools I didn't have back then. If I had broadcast them way back when, they would not have thrived. Many plants require burying to grow. And even if they don't grow, but decompose in the ground, they help make the soil more fertile for other plants.

Some of my best
poems
are ones I planted
in a drawer
for 15 or 20 years
and then dug out
with tools I didn't have back then.


If I had harvested them
way back when,
they would not have thrived.
Some seeds must be buried to grow.
And even if they don't grow,
but decompose in the ground
they just make the soil more fertile.

Good discussion here. Much to consider...

And ultimately, the answer to the question is, of course, unique to each of us.

Thanks, T.M., for this mind churning blog. There is a biblical adage that "Iron sharpens iron" - and this dialogue seems to have demonstrated its validity on some level. Thanks, everyone, for the sharpening!

Poetry would become boring, methinks, if we all had the same answers all the time.

Thanks, Geoffrey, for seeing a poem where I did not. Might have to do something with that.... ;)

a poems struggle is in it efficacy, a personal revelation in private, acting out in public.