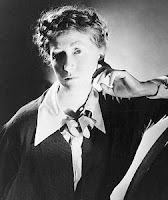 Although I have read
Marianne Moore's poem "Poetry," I never realized that she was, well, somewhat obsessed by it. According to Robert Pinsky, writing in Slate, "I've never been completely sure what I think about Marianne Moore's celebrated poem "Poetry." Apparently, Moore had similar feelings—revising the poem many times across the span of five decades. (You can find a couple of unpublished revisions here, courtesy of my friend and colleague Bonnie Costello, an eminent Moore scholar.)"

Now I revise my poems, and sometimes, I'll change a word years later, but after it's done, man it's done. The poem is the way the universe wants it. If you catch me revising anything over five decades, just shoot me.

If I've come upon new insights into an old topic, I'd rather write a completely fresh poem that springs off of the old, rather that constantly fiddle with the first piece.

And nothing we create will ever be "perfect". Too often, fudging with it beyond it's expiration date only makes it worse.