Chapbook Review: "Demon Lovers and Other Difficulties" by Nicole Kornher-Stace 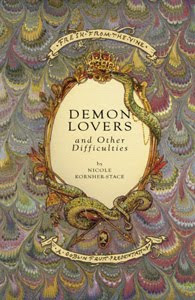 Demon Lovers and Other Difficulties

Fresh From The Vine


Summer of 2009 brought the first of what readers hope will be many installments of “Fresh From The Vine,” a chapbook series put together by Amal El-Mohtar and Jessica Wick, editors of Goblin Fruit. The first offering in this series is “Demon Lovers and Other Difficulties” by Nicole Kornher-Stace. This chapbook contains eight poems, including one collaboration with C.S.E. Cooney, and is gorgeously illustrated by Oliver Hunter.


Nicole Kornher-Stace was born in Philadelphia in 1983, moved from the East Coast to the West Coast and back again by the time she was five, and currently lives in New Paltz, NY, with one husband, three ferrets, a brand-new baby boy, and many many books. Her short fiction has appeared in Best American Fantasy, Fantasy Magazine, Ideomancer, Zahir, and Rhapsoidia, is forthcoming in a yet-to-be-named anthology from Prime Books, and was nominated for the 2007 Pushcart Prize. Her first novel is due out in July 2008 from Prime Books.


Many of these poems appear as part of the feature in the Summer 2009 edition of Goblin Fruit. These poems provide a short feature of the contents of the chapbook. The darkest, perhaps, is “This Is Not A Love Story,” in which the speaker warns a young girl, presumably her daughter or granddaughter, against believing in stories, exploring what happens, both good and ill, to young ladies in tales who wander after lovers. The advice the speaker gives is haunting, and hints more at her own past than anything useful for the young woman to follow. Take, for example, the suggestion “better a monster’s dedication than an angel’s disregard,” or the suggestion that young girl will know her lover “from his smell like gallows new-built/like trespass, like wrack, like homecoming.” This is the sort of exploration of folktales that Kornher-Stace follows, not so much a retelling of tales, but a reimagining of what came before or after, and the ominous lessons people should learn from them.


The pes de resistance of this collection is “Other Difficulties,” a collaborative piece written by Kornher-Stace with C. S. E. Cooney. This magnificent piece is framed as two letters between a witch’s “Fetch,” or ghost double and her lupine familiar, “Catch.” The word play and imagery in this piece is stunning, such as the familiar contemplating it’s creation: “Am I wolf by birth? Of worse? Torqued up from baby bones/Or golemed from the garden earth, her fevered spit/Her breath that smelled of primrose?” This piece is wistful, eerily lonesome and haunting, a folkloric tour de force that readers will want to return to again and again.


Nicole Kornher-Stace’s chapbook, “Demon Lovers and Other Difficulties” is mandatory reading for anyone interested in mythic and folkloric poetry, as well as anyone interested in speculative poetry in general. By purchasing this chapbook, readers will not only add significantly to their poetry library, but will also encourage the award winning editors at Goblin Fruit to produce more chapbooks in their “Fresh From The Vine” series, a double benefit certainly worth pursuing.

Goblin Fruit has been an interesting journal, with its themea on mythic and fairy-tale material. (And they've published quite a few of the Cleveland-area speculative poets, too.)
It's interesting to see that they will now be publishing chapbooks! Might be some quite ground breaking stuff here.