“I write books because nobody told me I couldn’t.”

Somehow I think Loung Ung would have written even if someone had told her she couldn’t.  Author of the two book length memoirs First They Killed my Father and Lucky Child chronicling her life growing up in war ravaged Cambodia and subsequent refugee experience in the United States, Ung exuded courage, strength and conviction as she spoke this past Sunday as the latest author presented by the Cleveland Public Library’s Writers and Readers Series. 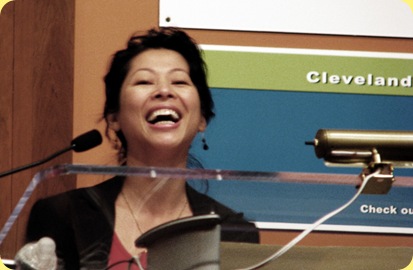 Around four hundred folks packed into the Lois Stokes Wing auditorium to listen to this Cleveland based author talk about her writing and work as a human rights activist. A local writer friend of mine who knows Ung told me she was going to speak more about her writing than her activism during this session. She also told me that Ung was worried that there would only be a handful of people in attendance. The latter wasn’t a problem, the CPL’s Writers and Readers Series is turning into the worst kept secret of Cleveland’s literate.

Ung opened her talk by giving thanks for the gray skies outside, explaining that she was worried another in a set of recent bright sunny November days in Cleveland might keep folks away from the event. She also said that while the winter weather was not her favorite aspect of living in the City she did appreciate the quality of life and affordability of living here. When asked “Why Cleveland?” by various interviewers her reply is “Have you been there?” followed by the ubiquitous joke “we’re not Detroit.” 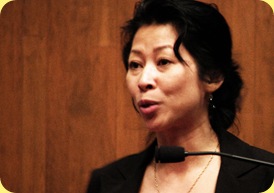 Ung spoke about her early life  up until the age of five in Cambodia. Her memories are of a lush green countryside, Buddhist temples, flowers blooming in every season (which consisted of two – hot and wet and hot and dry) a country with a two thousand year history that would soon be devastated by four years of war. She grew up with two Elvis Presley wanna be brothers and three sisters. The sisters, she shared, were so noisy that her father often threatened to trade them in for a set of monkeys.  Loung had a pet chicken and her mother worried about her being too much of a tomboy. Her father, a military policeman, didn’t mind. “She is clever,” he said. “She gets herself into trouble – but she gets herself out again, she’ll be fine.” She recalled going to Sunday movies as a family, sitting in her father’s lap, crunching fried crickets.

In 1975 the soldiers came. Everything became banned – the movie theater, markets, school religion. Then the new authorities began rounding up anyone they thought might be a nuisance to their agenda – doctors, teachers, lawyers, musicians, and artists - finally they came for her father. Her mother knew the safest thing would be to split up the rest of the family. Loung believed her mother was weak for not keeping the group together, it would take her growing up to realize how wrong this idea was. This is the story of First They Killed my Father. 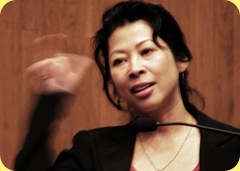 Lucky Child picks up Ung’s life as she travels as a refugee to the United States, her third choice of possible destinations that she selected as she waited to leave Cambodia. One of her brothers had managed to scrape together enough money, three ounces of gold, to get three people out of the country, himself his wife and after an agonizing decision process, Loung – the lucky child. The book also tells the parallel story of her sister, still in Cambodia.

The work of surviving peace can be as traumatic as that of enduring war. The American movies the refugees were shown in preparation of their shipping off to the country of big cities, discos, and people on roller-skates with boom boxes on their shoulders were of little use as preparation for Loung who ended up sponsored by a church group in rural Vermont.

The first thing Ung noticed was that everything was big. Big cars, big stores, big vegetables, big food in general and she decided that was why the Americans themselves were so big – they ate big things.  Even with all the best intentions, including Uncle Ben’s rice and the Brady Bunch, Loung was keenly aware of how much of an outsider she was. Loung had forgotten how to live in peace. 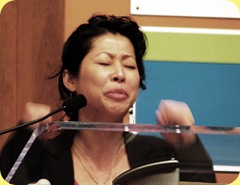 Then she discovered the public library. She didn’t have to be white, or popular, blond like Marsha Brady, or wearing the latest fashion to take a book from the library. All she needed was that little card and she could take the books home. At first she read to escape – she could be anywhere, anybody at any time. She solved mysteries with Nancy Drew, flirted with the Hardy Boys reading was a shelter. Then she read Frankl’s Man’s Search for Meaning and she discovered writing as a means of therapy and Loung began keeping a journal. Maya Angelou’s I Know Why the Caged Bird Sings helped chart a path where Ung’s voice changed from that of victim to survivor from shame to pride and she decided she would write the story of her life. A multitude of readers are glad she did.

Loung Ung now owns a restaurant here in Cleveland and is very active in numerous human rights organizations with aid to victims of landmines topping the list. For more information you can check out her blog at: http://www.loungung.com 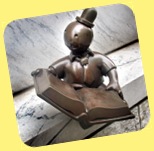 Posted by michael salinger at 10:31 AM