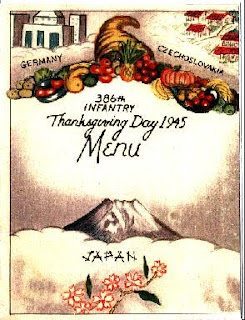 It was actually all Sergeant Knight’s fault that Yossarian busted Nately in the nose on Thanksgiving Day, after everyone in the squadron had given humble thanks to Milo for providing the fantastically opulent meal on which the officers and enlisted men had gorged themselves insatiably all afternoon and for dispensing like inexhaustible largess the unopened bottles of cheap whiskey he handed out unsparingly to every man who asked.

Even before dark, young soldiers with pasty white faces were throwing up everywhere and passing out drunkenly on the ground. The air turned foul. Other men picked up steam as the hours passed, and the aimless, riotous celebration continued. It was a raw, violent, guzzling saturnalia that spilled obstreperously through the woods to the officers’ club and spread up into the hills toward the hospital and the antiaircraft-gun emplacements. There were fist fights in the squadron and one stabbing.

Corporal Kolodny shot himself through the leg in the intelligence tent while playing with a loaded gun and had his gums and toes painted purple in the speeding ambulance as he lay on his back with the blood spurting from his wound. Men with cut fingers, bleeding heads, stomach cramps and broken ankles came limping penitently up to the medical tent to have their gums and toes painted purple by Gus and Wes and be given a laxative to throw into the bushes. The joyous celebration lasted long into the night, and the stillness was fractured often by wild, exultant shouts and by the cries of people who were merry or sick. There was the recurring sound of retching and moaning, of laughter, greetings, threats and swearing, and of bottles shattering against rock. There were dirty songs in the distance. It was worse than New Year’s Eve.

Email ThisBlogThis!Share to TwitterShare to FacebookShare to Pinterest
Labels: thanksgiving

What a thin
gruel
these bones
would make