It's hard to figure out how much poetry is being published in America. When I suggested to Michael Neff, founder of Web del Sol, that anyone can start an online journal for $100, he pointed out that anyone can start one via a blog for nothing. If current trends persist, the sheer amount of poetry "published" is likely to double, quadruple, "ten-tuple" in the decades ahead.

A word to the novelist on how to write better books

In the vast whiteness
a white speck appears to move.
Perhaps it’s nothing.


from the current issue of Now Culture
featuring short poems


From the annals of Life Magazine - Famous Literary Drunks & Addicts 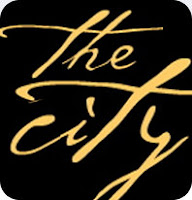 Editor Kathy Ireland Smith has published the long-awaited new issue of her online poetry 'zine, the City Poetry. Just out is ISSUE 24.
Not even mentioning the poetry, it's a gorgeous 'zine just for the art. (And the earlier issues, going back to 2002, are also worth a view.)

And, if you're a facebook junkie, you can join the City's facebook fan page.
Posted by Geoffrey A. Landis at 12:01 AM 3 comments:

Brunswick in the News

Check out the article about last Thursday's Brunswick Arts poetry reading in the Brunswick Sun:
"The words are part Bob Dylan-dada, part Andy Warhol soup-can pop-art stream-of-conscious, complete with a cast of characters ready for their 21st Century close-up.

"They spill from the poet’s lips, piling atop one another with scurrilous abandon, catching the small crowd of listeners up in a hypnotic rhythm and subtle shock reminiscent of Jack Kerouac’s finer road hymns and the unflinching simplicity of Charles Bukowski.

"“I don’t want to be Barack the rock star,” poet John B. Burroughs, aka Jesus Crisis, read from one of his self-published poetry “chapbooks” last week at a gathering of the Brunswick Art Works’ poetry reading group at Dunkin’ Donuts on Center Road. “Hilary Clinton/John McPalin/Cheech and Chong/ Kennedy Nixon/Mason Dixon/K-Fed, A-Rod, Brangelina, Britney or Bono/Or do I?”

"Still, the almost maniacal flow and off-the-cuff casualness of Borroughs’ lyrical imagery is, for all its outward bombast, the kind of chillingly introspective insight that comes only after very long bouts of isolation. And while the Elyria native has been writing since childhood, it was isolation of the most chilling sort that allowed him to both expose his art to the public more than a decade ago, and support himself with it today...."

Bet you wish you were there! Well-- the Brunswick Arts readings, sponsored by Brunswick Artworks, are every second Thursday of the month. Check for the listing here.

water pomes thanks water poems thanks

i got so many water poems for the benefit of Isaac's Wells
i am actually making two volumes of the book.

so thanks to all who responded, again the book (or now, books)
will be released as a door prize at the March 27th event
"Saturday Night at the Parthenon" which is named after one of
Kenneth Patchen's poems (about entering an other world),
and will take place at The Lit on Superior (in the ArtCraft Bldg)
with among other things rootsy music Cleveland style, Q&A with
the author of Sleeping With the Sun In His Eyes, fab poets,
a fat raffle, and a $7 suggested entry fee.

did i say it starts at 7pm?

Get an accountant, abstain from sex and similes, cut, rewrite, then cut and rewrite again – if all else fails, pray. Inspired by Elmore Leonard's 10 Rules of Writing, we asked authors for their personal dos and don'ts...


About a year ago, a friend and I noticed a theme running through many New Yorker poems: With astounding frequency, they were about writing poetry. Can New Yorker Poets Write About Anything Besides Poetry?


On the passing of the great Lucille Clifton

i would sit in the center of the world,
the Black Hills hooped around me and
dream of my dancing horse. my wife

was Black Shawl who gave me the daughter
i called They Are Afraid Of Her.
i was afraid of nothing

except Black Buffalo Woman.
my love for her i wore
instead of feathers. i did not dance

Black Buffalo woman. hear me;
the hoop of the world is breaking.
fire burns in the four directions.
the dreamers are running away from the hills.
i have seen it. i am crazy horse.

SFWA is proud to announce the nominees for the 2009 Nebula Awards.

The Nebula Awards are voted on, and presented by, active members of SFWA. The awards will be announced at the Nebula Awards Banquet the evening of May 15 at the Hilton Cocoa Beach Oceanfront, just 20 minutes from the Kennedy Space Center in Fla. Other awards to be presented are the Andre Norton Award for Excellence in Science Fiction or Fantasy for Young Adults, the Bradbury Award for excellence in screenwriting and the Solstice Award for outstanding contribution to the field.
Short Story
Novelette
Novella
Novel
The Ray Bradbury Award for Outstanding Dramatic Presentation
Andre Norton Award for Young Adult Science Fiction and Fantasy

For more information, visit www.nebulaawards.com or www.sfwa.org
About SFWA
Founded in 1965 by the late Damon Knight, Science Fiction and Fantasy Writers of America brings together the most successful and daring writers of speculative fiction throughout the world.
Since its inception, SFWA® has grown in numbers and influence until it is now widely recognized as one of the most effective non-profit writers’ organizations in existence, boasting a membership of approximately 1,500 science fiction and fantasy writers as well as artists, editors and allied professionals. Each year the organization presents the prestigious Nebula Awards® for the year’s best literary and dramatic works of speculative fiction.
Posted by JJ Stickney at 11:05 PM 1 comment:

Not to read in a hurry, or even to have forever and ever--

Lix and Kix Now on Wednesday! 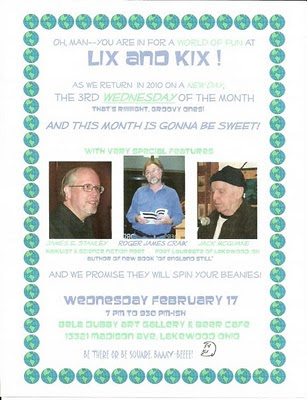 The Lix and Kix poetry series Dianne Borsenik and I host at Bela Dubby in Lakewood is moving to the 3rd Wednesday of each month. Tuesday was never our preferred day - we only took it in the first place because that was the only day our first venue, the 806 in Tremont, would give us their space - and we only kept it because we figured people were already used to our having Lix and Kix on a Tuesday. But I've been itching to change the day for some time now - largely because there are two other very worthy poetry events that happen around Cleveland on the 3rd Tuesday of each month: the Nia Coffeehouse at the Coventry Village Library and (during the school year, at least) the CSU Poetry Center's longstanding reading series. Moving to the 3rd Wednesday allows us to complement and support these other fine venues instead of competing with them. And this makes me happy.

Here are a few upcoming happenings I hope you'll check out:

Wednesday 17 February 2010 at 7 p.m. -- J.E. Stanley (co-author, with Joshua Gage, of the newly released Intrinsic Night, from Sam's Dot Press), Jack McGuane (Poet Laureate of Lakewood and author of Sleeping with My Socks, from deep cleveland press), and Roger Craik (author of the just published Of England Still, from Finishing Line Press) will be featured poets during the Lix and Kix poetry extravaganza at Bela Dubby, 13321 Madison Ave. in Lakewood, Ohio. An open mic will follow.

Friday 2 April 2010 at 6:30 p.m. -- Dianne Borsenik and John Burroughs will be among the featured performers during the Ohio Poetry Association's poetry & music series at the New Beginnings Cafe, 141 East Center Street in Marion, Ohio. An open mic will follow.

Oh, and I've uploaded about 300 of my photos from Snoetry: A Winter Wordfest (which Dianne and I co-hosted on 16 January at the Last Wordsmith Book Shoppe in North East, PA) to my Facebook profile, in case you're interested in having a look.

The Akron Art Museum is sponsoring their New Words 2010 poetry contest. Postmark deadline is February 26, and -- here's the good part-- there's no reading fee. (I hate contests with reading fees.) Horray for Akron Art Museum!!
The judge will be Cleveland poet George Bilgere (author of The Going, Big Bang, Haywire: Poems and The Good Kiss, among other things-- but you knew that-- and, incidentally, the winner of the 2001 Akron Poetry Prize.) So, the contests is really very easy: all you have to do is write a poem that knocks George Bilgere's socks off.
Oh, and save the date--the top finalists will have the opportunity to read their poems (or have them read) at an awards ceremony during the New Words 2010 Poetry Reading at the Akron Art Museum on Sunday, April 25, 2010, from 2 - 4 pm.
Oh, and one more thing-- save some time to see the museum. It's a great one (and a righteously wonky new building). You might even get struck by the muse to write an ekphrastic poem! Stranger things have happened.
Posted by Geoffrey A. Landis at 6:42 PM No comments:

they may be political, or nature poems, spiritual, seasonal,
personal or global. they must not exceed 25 lines, and
should be submitted no later than Feb. 21 2010.
they will be published in a book to raise money for
Isaacs Wells, thru which Lost Boys of Sudan travel to
Africa to get water and wells into villages where people
often die because of a lack of clean water. a handful
of poems will be selected. thoughtful, straightforward
poems are most desired. ok, they can make ya laugh too.

submit as a word document to greenpandapress@gmail.com
Posted by Pressin On at 9:45 AM 1 comment:

Musing on the Muses

Where Have All the Muses Gone?
"Whatever happened to the Muse? She was once the female figure -- deity, Platonic ideal, mistress, lover, wife -- whom poets and painters called upon for inspiration. Thus Homer in the Odyssey, the West's first great work of literary art: "Sing to me of the man, Muse, of twists and turns driven time and again off course." For hundreds of years, in one form or another, the Muse's blessing and support were often essential to the creation of art."
--the article's worth perusing just for the art show of muses from Rembrandt through Picasso, if nothing else.
Are muses still alive? Do you have a muse?
In any case, “Muse” is also the name of the Lit Center’s magazine! So we can celebrate the Muses right here.
Posted by Geoffrey A. Landis at 12:01 AM 4 comments: