Horray for dan smith and J.E. Stanley, whose recent chapbook collections of speculative poetry were just reviewed in Amazing Stories by Diane Severson. Says Diane:
"Today’s post brings you two poetry reviews of chapbooks by Cleveland poets, one each by J. E. Stanley and dan smith. The Greater Cleveland area is a little hotbed of genre poetry! It is lucky enough to count Mary A. Turzillo, Geoffrey A. Landis and Joshua Gage among its inhabitants. Those three are award-winning poets whose work I’ve reviewed and podcasted here and on Poetry Planet. With this post I bring you two more fine genre poets and introduce a lovely small press (NightBallet Press), edited by Dianne Borsenik, which produces saddle-stitching bound chapbooks and broadsides, attractively presented with heavy paper and color photographs gracing the covers and the interiors."

Eye to the Telescope: Speculative Juxtapositions

Cleveland's Joshua Gage is the guest editor of SFPA's Eye to the Telescope web poetry-zine, for a theme issue "Juxtapositions in Speculative Poetry."  A half dozen poems, all in one way or another dealing with the theme of juxtaposition.
From Josh's introduction:

Juxtaposition is one of the basic and essential craft tools that every writer needs to master. It is also one of the most effective tools a writer can use because it forces the reader to contemplate new ideas and to place the familiar in new contexts. When used effectively, juxtaposition forces the reader to be complicit in the writing of the poem, forces them to participate in the logic and sense of the poem, creating a more fulfilling reading experience. Speculative literature thrives on juxtaposition, often asking readers to place the known and ordinary against the unfamiliar, the strange, and the fantastic. It is in these pairings, these juxtapositions, that the imagination flourishes and the reader is rewarded with new perspectives, new ideas and views on the world. The poems in this issue will, through juxtaposition, reward you in such a way.

Michael Ceraolo is one of our most widely-published poets, but seems to be yet one of the lesser known ones.  This one was published in the January 2014 issue of Long Story Short.


Mounds of
plowed snow remain
after inches of rain,
held together by the debris
from streets
Posted by Geoffrey A. Landis at 12:30 AM No comments:

Elliot Nicely lives in Amherst, Ohio where his boys are teaching him to giggle and dance again. His poems have been published in Acorn, Atlas Poetica, Mayfly, Paper Wasp Acorn, frogpond, bottle rockets, Kokako, Modern Haiku, Notes From the Gean, moonset, and White Lotus. His book, Tangled Shadows, is available on Rosenberry books. The book itself is hand bound, with a heavy Somerset cotton cover, and stab bound with a linen cord--a very elegant thing to behold.
The senryu in this book are quite striking and poignant. They work as commentary on the human condition, displaying a wry sense of humor that is the hallmark of good senryu, and that is often lost in modern attempts at the form.
first date
no fortune cookies
with the bill

The haiku in this collection are more subtle, and very successful. They juxtapose the natural world against the human, often with surprising results. Despite their understanding of haiku and its history, they still read as quite contemporary.
indian summer
...the rest of
our argument

While the bulk of these poems are quite successful, Nicely occasionally gets heavy handed with his juxtapositions, and the poems read as clever, lacking in the the elegance and natural ease that a haiku should contain.
the promise
it won’t happen again
black-eyed susans

Overall this is a strong collection. It is visually stunning, and the haiku and senryu contained within will draw readers back to them again and again.
Posted by pottygok at 9:56 PM No comments:

Geoffrey A. Landis is the 2014 winner of the Robert A. Heinlein Award


Geoffrey A. Landis to Receive 2014 Robert A. Heinlein Award


Geoffrey A. Landis, science fiction author and scientist working for the National Aeronautics and Space Administration (NASA), is the 2014 winner of the Robert A. Heinlein Award. The award is bestowed for outstanding published works in science fiction and technical writings that inspire the human exploration of space. This award is in recognition of Mr. Landis’ body of work including five books, 83 short stories and 76 poems in the SF field as well as over 353 science fact publications.

The award will be presented on Friday, May 23, 2014 at opening ceremonies during Balticon 48, the Maryland Regional Science Fiction Convention. Balticon and the Robert A. Heinlein Award are both managed and sponsored by The Baltimore Science Fiction Society.

The Robert A. Heinlein Award is a sterling silver medallion bearing the image of Robert A. Heinlein, as depicted by artist Arlin Robbins. The medallion is matched with a red-white-blue lanyard. In addition, the winner receives two lapel pins for use when a large medallion is impractical, and a plaque describing the award, suitable for home or office wall display.

Winners of the Robert A. Heinlein Award:

More information on the Robert A. Heinlein Award, including past winners, can be found at http://www.bsfs.org/bsfsheinlein.htm

Email ThisBlogThis!Share to TwitterShare to FacebookShare to Pinterest
Labels: Geoffrey A. Landis

CBS Cleveland lists their choices for the best poets in Cleveland.

the Cleveland Collaborative Renga!
We have now finished the opening six verses (the "jo"), and now we're in the main part (the "ha").
(to see the opening stanzas, click here, to continue to part 3, click here). 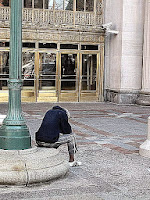 cars roll past the monument,
bronze soldiers from long ago

statues of soldiers--
their cast iron eyes downcast--
retreat from my love.

eidolons of burnt rivers
histories of bone and ash

blue sky morning
your pink hair-rollers
on the floor

eleven roses -- heart pierced
by thorns of the absent stem

Join the fun!
To add a stanza, continue to part 3!

Panda in the Pigg Penn

Cleveland Heights poet Bree, the panda of Green Panda Press, was interviewed by Catfish McDaris in the blog Pigg Penn. 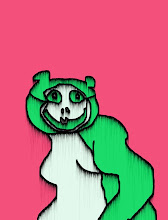 How long have you been writing? When i was 4 or 5 i wrote little satirical comic strips. When i was 9 i wrote stuff that would disturb anybodywith a heart. By 12 i wrote poetry, and by 14 i understood that it was poetry. i have never written a short story, however a few months ago a wrote a novel---it took me seven weeks, and i really like it. it will be the first piece of writing i actually peddle in the market. Its humor, love triangle, clevelandish. Stay tuned for that.