Woody Guthrie’s landlord was none other than Donald Trump’s dad! Their relationship made for some interesting lyrics, reports The New Republic. “Guthrie lived for two years in a Brooklyn apartment the elder Trump owned, but grew upset at the racist policies that the real estate developer used to exclude blacks from his property.”

As Kaufman notes, both Fred Trump and his son would be investigated by the government for allegedly racist leasing practices.

Gawker has more from Kaufman himself:

In 1979, 12 years after Guthrie had succumbed to the death sentence of Huntington’s Disease, Village Voice reporter Wayne Barrett published a two-part exposé about Fred and Donald Trump’s real estate empire.
Barrett devoted substantial attention to the cases brought against the Trumps in 1973 and 1978 by the Civil Rights Division of the U.S. Justice Department. A major charge was that “racially discriminatory conduct by Trump agents” had “created a substantial impediment to the full enjoyment of equal opportunity.” The most damning evidence had come from Trump’s own employees. As Barrett summarizes:

According to court records, four superintendents or rental agents confirmed that applications sent to the central [Trump] office for acceptance or rejection were coded by race. Three doormen were told to discourage blacks who came seeking apartments when the manager was out, either by claiming no vacancies or hiking up the rents. A super said he was instructed to send black applicants to the central office but to accept white applications on site. Another rental agent said that Fred Trump had instructed him not to rent to blacks. Further, the agent said Trump wanted “to decrease the number of black tenants” already in the development “by encouraging them to locate housing elsewhere.”
Guthrie had written that white supremacists like the Trumps were “way ahead of God” because

God dont know much about any color lines.
Guthrie hardly meant this as a compliment. But the Trumps – father and son alike – might well have been arrogant enough to see it as one. After all, if you find yourself “way ahead of God” in any kind of a race, then what else must God be except, well, “a loser”? And we know what Donald Trump thinks about losers.
One thing is certain: Woody Guthrie had no time for “Old Man Trump.”

The Soviet artist Vagrich Bakhchanyan hoped to subvert his government by using its own language against it in his art: “He made works on paper in which appropriated texts and images were combined and layered using transfer techniques, some utilizing official notices by Soviet administrators—the terse, usually handwritten flyers that punctuated the everyday life of Soviet citizens with warnings, admonitions, and exhortations. One such announcement scribbled on a page torn out of a logbook reads: ‘Comrade residents! On Monday the 19th there won’t be any cold or hot water. We ask you to close the taps and shut off the heating system.
We’ve known for a while that fairy tales are old, but only now have we discovered that they’re in fact really, really, really old—an important distinction. Stories like “Beauty and the Beast” and “Rumpelstiltskin” originated thousands of years ago, researchers suggest, in “prehistoric times, with one tale originating from the bronze age”: “Using techniques normally employed by biologists, they studied common links between 275 Indo-European fairy tales from the world and found some have roots that are far older than previously known, and ‘long before the emergence of the literary record.’ ” 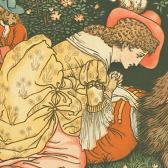 Email ThisBlogThis!Share to TwitterShare to FacebookShare to Pinterest
Labels: politics

The Singers' Club of Cleveland is a 123-year-old men's chorus.  Their concert in March ("A Whitman Sampler") will feature songs inspired by American poetry. Their guest performing group for that concert will be Distinguished Gentlemen of Spoken Word.

In conjunction with that concert, The Singers' Club is sponsoring a poetry contest with $250 cash prizes for the winners and a $100 prize for the best submission from Cuyahoga County. 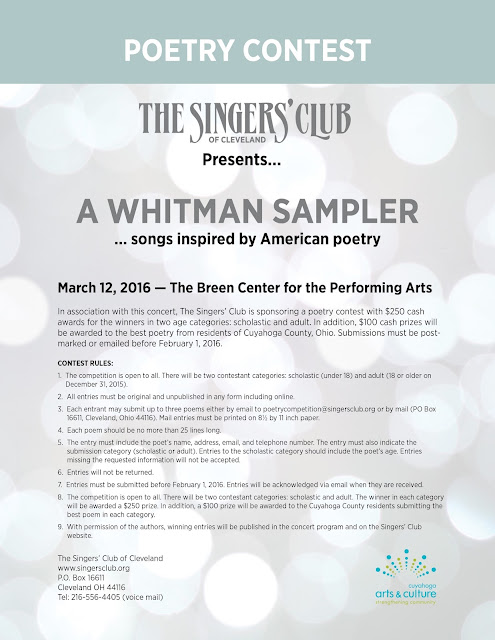 For more about the Singers, please visit www.singersclub.org.
Posted by John B. Burroughs at 8:49 AM No comments:

Things Not to Do at a Poetry Reading--

Posted by Geoffrey A. Landis at 8:33 PM No comments: