Kelli Russell Agodon's blog pointed me to this one: "Why intelligent people fail."
Hmm.
Yeah, I can see myself in a lot of these.
Posted by Geoffrey A. Landis at 11:47 PM No comments:

Do you submit?
Your poetry, that is-- are you sending it out to magazines?
New Pages has a bi-weekly update on editors looking for submissions-- not to mention a nice page of reviews of literary magazines, and alphabetical lists of lit-'zines and alternate 'zines. If you tend toward the inspirational side, the Christian writers site has their own list of calls for submissions to look at. Or take a look at the Poets and Writers list of magazines.
For that matter, if you're too lazy to put a stamp on an envelope (or too poor-- we all know that story these days, alas), Louis Crew has a list of poetry publishers who accept electronic submissions. Or try a search on duotrope.
So-- do you submit? Why not?
Posted by Geoffrey A. Landis at 6:58 PM 3 comments:

Bridge over dirty water.
On the pavement,
a girl's lost ribbon.
-Geoffrey A. Landis .

It's so jejune to be a fan of Billy Collins these days, but for those of us who aren't afraid to like a poet just because he's gotten popular, the Writers Center Stage series sponsored by the Cuyahoga County Public Library Foundation and Cleveland State University will be bringing Billy Collins to the Ohio Theatre at Playhouse Square on November 8.
Tickets are $30... if you think that's a lot of cash to go hear a writer, hey, at least I'm glad to see writers get the star treatment...
Info on the William N. Skirball Writers Center Stage program is here:
The full list of 2011-2012 writers being featured includes in 2011 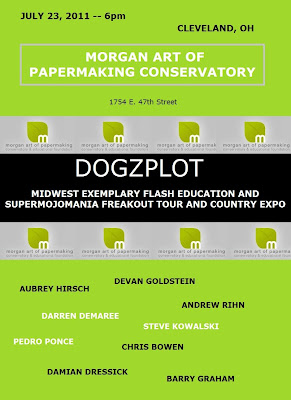 24-hour poetry marathon - you can be a feature for only $1 a minute and support Cleveland's slam team! 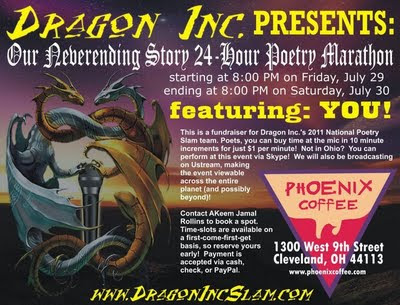 Click pic for a larger version of the flier. Contact Akeem Jamal Rollins for more info or visit the Facebook event page.
Posted by John B. Burroughs at 10:17 AM No comments:

In the smudged brown sky
the pockmarked moon shines golden
over brick smokestacks
--Geoffrey A. Landis
.

Posted by Geoffrey A. Landis at 7:05 PM No comments: 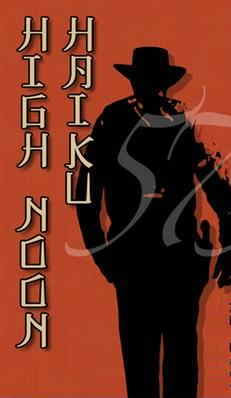 The Cleveland Haiku Death Match is back!
Now called "High Noon Haiku" (since, despite the name, no poets were harmed during the previous deathmatch), the haiku contest is Friday, August 5, at Dobama Theatre at the Heights Library, 2340 Lee Road, Cleveland Heights.
Too scared to go head to head in a high-noon shootout? Well, open Mic is at 7PM and participants can bring three haiku to read to the audience.
The event is cosponsored by Heights Arts and Dobama.
According to the event page at Heights Arts:

Admission $15 at the door

Hi all, please check out the below information sent to me by the lovely and talented Steve Goldberg. Should prove to be an excellent time!

Arriving into the Cleveland area is a talented writer and reader of poetry from the Upstate New York area. I had the pleasure of hearing and meeting Robert Milby last summer when I went on that adventure in poetics known as the Rusted Trim Poetry Tour with Dorsey and Bunsen. Robert impressed me incredibly and when I heard he wanted to come to Ohio I got right on it.

He will be at Mac's Backs Wednesday, July 20th at 7 P.M. Yes, that's right folks. This isn't the usual poetry reading night for Mac's. He will be joined by novelists, Grant Baillie (Cleveland), Peter Grandbois (Delaware, Ohio), Steve Himmer (Quincy, MA), and Jim Mason (Cleveland). Apparently, my opinion has a little weight for some as you can see from Suzanne's write-up for the event. (Yes, I'm humbled and a bit embarrassed, but I won't let it stop me from boasting).

"I found out about Robert Milby when Steve Goldberg called and said he was one of the best poets he'd ever heard. Robert is the author of several poetry chapbooks including Crow Weather and has had his work published in lots of journals. He is an integral part of the Hudson Valley poetry community---he hosts a reading series at the Mudd Puddle Cafe and is the co-editor of the Wawayanda Review."

The short intro doesn't do Robert justice, so just come down to Mac's, catch a hippieburger at Tommy's, bring cash to buy Robert's stuff (cuz you're gonna want to after you...), listen to him versify like the you never heard versification before.

Please note that I was able to stop making this about me and shared the limelight with Robert Milby, even for just another paragraph. :D
Posted by His Majesty King Mob at 11:41 AM No comments: 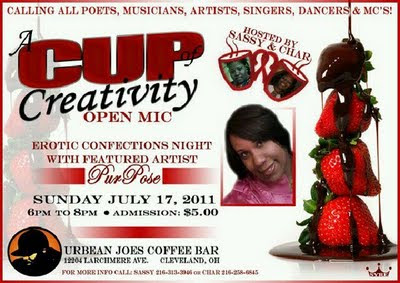 Email ThisBlogThis!Share to TwitterShare to FacebookShare to Pinterest
Labels: PurPose 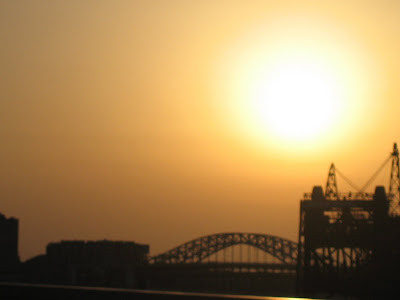 Major Award for Geoffrey A. Landis

McDonald was born in Scotland in 1960 but was moved to Northern Ireland when he was five, and lived through the troubled years. He was turned on to science fiction by childhood television programs and began writing at the age of nine. He sold his first story at twenty-two and became a full-time writer in 1987. Much of his writing has focused on the developing nations of Africa, India, and South America, and one commentator has suggested that his life in Northern Ireland led him to consider that country a “third-world” society. The Dervish House is set in Turkey, specifically Istanbul, five years after Turkey has been admitted to the European Union and offers, one reviewer said, “a coalescence of order out of interacting possibilities.”

Landis came to science fiction through science. He was born in Detroit in 1955 but moved regularly throughout his childhood. He is a NASA scientist with a Ph.D. in physics from Brown University after undergraduate studies at M.I.T. in physics and electrical engineering. He has worked on several space missions, including Mars Pathfinder and the long-lived Mars Exploration Rovers. He began publishing science fiction in 1984 and attended Clarion in 1985, where he met his wife, writer Mary Turzillo. Landis has won two Hugo Awards and a Nebula Award for his short fiction. He is known as a writer of “hard science fiction,” and “The Sultan of the Clouds” describes a possible way of living on Venus–or, rather, living in floating cities in the upper atmosphere of Venus.

This is McDonald’s second trip to the Awards ceremony. His “Tendeleo’s Story” won the Sturgeon Award in 2001.

The Awards are presented by the Center for the Study of Science Fiction during the Campbell Conference, a four-day event held annually at the University of Kansas. The Campbell Award is selected, from nominations by publishers, by a jury composed of seven writers and academics. The Sturgeon Award is selected, from nominations by reviewers and editors, by a jury composed of five writers and academics.

More information about the Awards and Conference is available on the Center’s website.