Be a Writer in the Window at Appletree Books

Appletree Books in Cleveland Heights still has slots available if you want to be one of their writers in the window for the month of November. To join the fun, apply here. 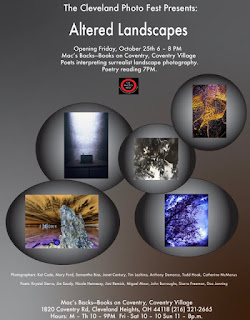 Everything Obliterated/For Good, 10/15 at Poetry+ in Lakewood 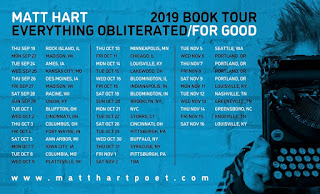 Acclaimed poet Matt Hart will bring his 2019 tour to Poetry+ at Art on Madison in Lakewood, Ohio, on October 15th, and he will be joined by Cleveland favorite Nicole Hennessy.

Matt Hart is the author of nine books of poems, including most recently Everything Breaking/For Good (YesYes Books, 2019) and The Obliterations (Pickpocket Books, 2019). Additionally, his poems, reviews, and essays have appeared or are forthcoming in numerous print and online journals, including The Academy of American Poets online, Big Bell, Cincinnati Review, Coldfront, Columbia Poetry Review, Harvard Review, Jam Tarts Magazine, jubilat, Kenyon Review online, Lungfull!, POETRY, and Waxwing, among others. His awards include a Pushcart Prize, a 2013 individual artist grant from The Shifting Foundation, and fellowships from both the Bread Loaf Writers' Conference and the Warren Wilson College MFA Program for Writers. A co-founder and the editor-in-chief of Forklift, Ohio: A Journal of Poetry, Cooking & Light Industrial Safety, he lives in Cincinnati where he teaches at the Art Academy of Cincinnati and plays in the band NEVERNEW: www.nevernew.net.

Nicole Hennessy is a poet and journalist from Cleveland, Ohio. Gypsy Queen (Crisis Chronicles Press, 2019) is her debut poetry collection, though she has been chasing poetry for more than twenty years. Her previous publications include Black Rabbit, a nonfiction profile of poet and artist Tom Kryss. Nicole also co-founded the underground art and literary bimonthly, Miser Magazine; and she will eventually launch her art and outreach effort, Universal Eccentrics, with some incredible, like-minded weirdoes. Her work has appeared in local and regional publications, and she was recently recognized as a Wild Wmn by the LA-based women’s artistic and wellness collective of the same name. Nicole is also mom to a spirited four-year-old boy. She’s probably cuddled up at home watching cartoons. You can stalk her on Instagram @nicohenness.

Poetry+ usually happens on the third Tuesday of each month. For more information, visit our website at https://poetrypluscleveland.weebly.com/.