Clevelanders in the Eye's Body

You wouldn't know it, but Cleveland is seriously a hotbed of speculative poetry.  The Science Fiction Poetry Association has just came out with issue 9 of their online journal of speculative poetry, Eye to the Telescope. Each issue is a theme issue, and the latest, with guest editor Catherynne Valente, has a theme of "bodies:"


In science fiction and fantasy, the body is a battleground, a liminal space, a canvas, a friend, an enemy, an object, a subject, a transitory state, something to be left behind, something to be embraced, something to be denied, something to alter. All our experience begins in the body, and poetry, with its vivid, deep language, has always been uniquely situated to express the complicated relationship between the possessor of the body and the body itself.

The issue has poetry by two local poets, with two poems by Marie Vibbert, and two more by Joshua Gage. Congrats to Marie and Josh!

The SFPA also publishes the anthology Dwarf Stars once a year, with the best short-short speculative poetry of the year (full disclosure: I edited it last year), where "short short" includes haiku, senryu, cinquains, scifaiku, and other miscellaneous poems of ten lines and under.  I just received this year's Dwarf Stars volume yesterday, and see poems by Mary A. Turzillo, dan smith, and me.

You want to hear what short-short speculative poetry is about?  You're in luck: next month five of the Dwarf-star poets will be doing a reading from Dwarf Stars (both the last issue, and this one) at the Second Wednesday Poetry Reading, August 14 at 7pm at Mac's Backs.  Come at 7 for the feature; but stay for the round-robin poetry that follows!

Posted by Geoffrey A. Landis at 6:55 PM No comments:

"Some of the most powerful and memorable poetry reveals truths about the world—facts, figures, compass points on the map of human struggle, natural and man-made calamity, tyranny, war. The lyric impulse inherent in a poem pulls the reader, line by line, into a given sensibility; more effective, I believe, than any manifesto...  Such is also true of Shelley Chernin’s chapbook, The Vigil, which chronicles coal mining disasters in West Virginia and India, and the environmental and human toll of mining.  This is a poem of witness, a narrative sequence depicting coal mining in tangible and riveting lines. " 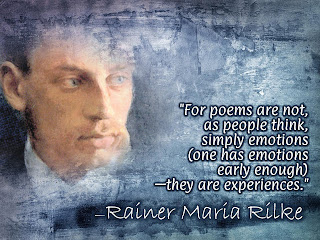 Poetry can take a lot of different forms, but it is definitely not a cupcake.

Poetry is the water and flour.

Posted by Geoffrey A. Landis at 6:11 PM No comments: 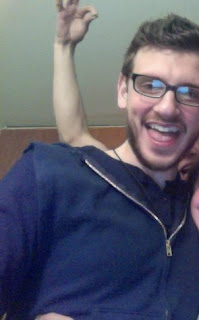 A few weeks back, I'd posted a note asking for new bloggers, to add some fresh voices to clevelandpoetics.

As an artist, my primary medium is ‘Thought.’ My work allows me to be an explorer of the unknown depths of the human mind, traveling uncharted territories. My journey is never-ending [like ideas]. My discoveries are rich - often new forms of art or new modes of thinking.

I wish to be a pioneer  - probing the Last Frontier (The Imagination) - "adding to the stock of available reality," [R. P. Blackmur].

I am guided by the spirit of play and a sense of community. The essence of all my work is Simpleand Youthful,  Primitive and Ritualistic, Interactive and Multi-Sensory, Innovative and Experimental.

--and check out his site, experimental poetry, and his facebook page.

Buy Me Some Peanuts and Crackerjack...

Let's talk about team sports for a minute. Let's set aside the Indians' tugging of our playoff hopes back and forth. Let's forget about the Browns' draft picks. NEO's Lake Effect Poetry Slam Team is heading to Boston for Nationals in a few weeks, and they need our full attention.

When I first started dipping my toes into the poetry reading scene, I didn't know anything about slam other than what I could glean from the comments of other poets and snippets of Def Poetry Jam I might have caught once or twice. I filled in the blanks with a lot of misconceptions.  Such as:

I quickly learned that slam was none of those things I used to think it was.

Slam is a poetry performance competition. Some poems lend themselves more readily to performance competition than others, but there is no defined genre for slam. Slam showcases a skill that every poet in every venue needs:  the ability to not only write an effective poem, but to then read/perform it in an engaging manner. Yes, there are some bad slam poems, but there are also some bad academic poems. And some of the best slam poems I've heard were on page.

Fast forward six years from those first open mics, and I found myself in Charlotte, NC for the 2012 National Poetry Slam, as Northeast Ohio's Grand Slam Champion. It was thrilling, terrifying, and inspiring to be around so many poets, to hear so many different voices, to be in front of so many different people.  Writing is a solitary activity, but slam is a team sport--a team sport with a national community.

National Poetry Slam is a chance for poets to stand in front of people from across the country and show off what we're doing here at home. And with this year's team--AKeemjamal Rollins, Caira Lee, Ariana Cheree, and Christine Howey--Boston's going to be buzzing about Cleveland.

But Lake Effect is still short of funds needed to get to Boston. The good news is that they have a handful of fundraiser events coming up in the next couple weeks before they leave. The better news is that you still have a chance to hear their poetry before they leave. Check out the schedule of Lake Effect fundraisers and readings, wish them well on their trip, and root root root for the home team!
Posted by Theresa Göttl Brightman at 11:41 PM 3 comments: 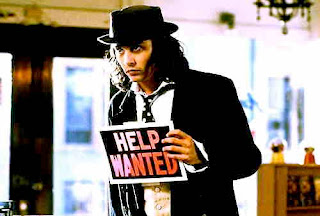 You wanna be a blogger?
We need you! Yes, you!
You could be famous in the neighborhood!

The clevelandpoetics blog needs new contributors.  This blog is not a one-person show, it's a collaborative effort of a raft of volunteers, and we're short on help.  We rely on you-- the poetic community of Cleveland-- to contribute.   Every year I see new voices beginning to speak in the Cleveland poetry community, and we need to hear what you have to say.  Join us!

You got something to say?  We're waiting to hear it!  You go to poetry readings, want to make comments on the local poetry scene, want to share your opinions on contemporary poetry?  Join us!  You think that the blog sucks rocks, and think you could do better?  We'd like to see you try!

We want you! We need you!   We can't live without you!


If you'd like to join the blogging team here at clevelandpoetics, we're open: leave a note in the comments, or drop me an email and say so!

No pay, just glory, and the chance to express yourself. Join the team!
Posted by Geoffrey A. Landis at 12:30 PM 5 comments:

Last weekend we went to Haiku ("poetic food and art) in Columbus, a restaurant featuring (among other things) a box filled with pieces of colored scratch paper on each table, for the people in the restaurant to write their own haiku as they ate.  The restaurant had a stacks of the writings people had left behind pinned with clothes-pins to pillars.

Most of the contributions, of course, weren't haiku, but just little memos with the date and names of the people, or notes saying "I love this place," or doodles of cats or fish.  A few, though, were rather charming.  A Valentine request asking a multiple-choice response in 5-7-5 form: 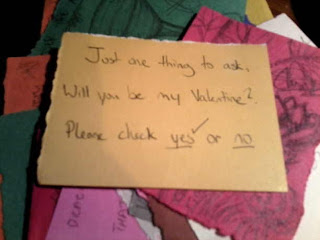 Or a somewhat scarier vision of love: 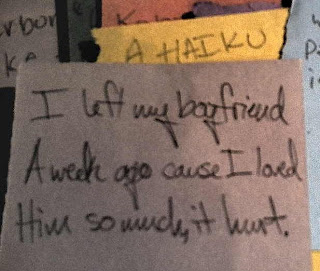 But then, this one seems to gets more directly to the point: 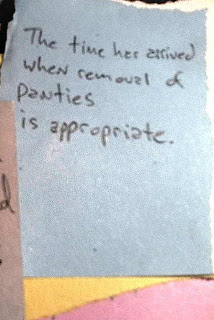 Robert Pinsky asks, "Why are William Cowper's poems so witty?"

and answers himself: because Cowper was convinced he was already damned.

Samuel Taylor Coleridge called him "the best modern poet", although he seems rather quaint and forgotten today.

Still, in these days when so many people seem to speak for God, it seems to me that Cowper's admonition in "Abuse of The Gospel" is as cogent as ever:

Too many, Lord, abuse Thy grace
In this licentious day,
And while they boast they see Thy face,
They turn their own away.