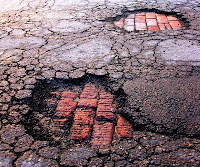 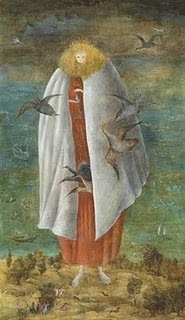 Leonora Carrington dies at 94; a leading

figure of the Surrealist movement

"One has to be careful what one takes when one goes away forever." — Leonora Carrington (The Hearing Trumpet)

the recital of dreams

You DO know that you are a dream don’t you?
Do you realize how completely alone the Divine Being is?
All that there is is only this Divine Being.
Our Beloved, our Self!
To hide from the Truth the Divine Beloved dreams that It is You!
And Me and All of US!!!
An infinately multiple personality
Look deeply inside of your self.
You will find only Me.
You and Me and Me and You!
But one of us is the other’s dream…
One of us must, in the end, die the death of a lie and the Other return to its aloneness.
But what good is this Truth?
Shall we not have pity on Our Self then and continue dreaming that We are You and I and I and You?
Let’s us live a little longer in this dream
Until we can no longer look into each other’s eyes, fool our selves and see another.
One day my dear mask, my poor victim, That shall crush in upon you and wash you helpless into an ocean you have long forgotten like a grain of sand.
Drowning, you will be forced to release yourself and return to Self. 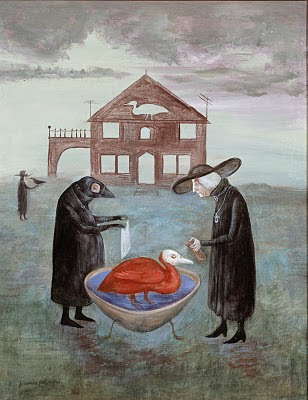 Like popcorn
hailstones bouncing off the roof
as tornado sirens wail.
--Geoffrey A. Landis

Bonus Haiku:
Sirens now silent;
hailstones melting in the grass.
Still the rain pelts down.
Posted by Geoffrey A. Landis at 8:47 PM 1 comment:

On May 11, poets read their poems for the Hessler Street Fair poetry contest at Mac's Backs. After a great deal of discussion and analysis by the distinguished team of judges(*), the 2011 Hessler Poetry Contest winners were announced:
First place: Vladimir Swirynsky, for "Already the Sky on Bent Knees"
Second place: Shelley Chernin, for "Rise and Shine"
Third place: Andrew Line, for "Catalyst (in memorium)"
Honorable mentions went to T.M. Göttl, for "On the Feast of Snow and Shadow," and Michael Bernstein, for "What it Does."
(official list here).
You can read all the poems in the 2011 Hessler Street Fair Poetry Contest book, available at the Hessler booth at the Fair, May 21 & 22, or available for purchase at Mac's.
If you missed the reading at Mac's, don't be blue: you've got another chance. On Sunday the winners will read from the stage at the Hessler Street Fair, simulcast on WRUW at 91.1 FM on the radio, and also on the internet, and webcast at hesslerstreetfair.org. 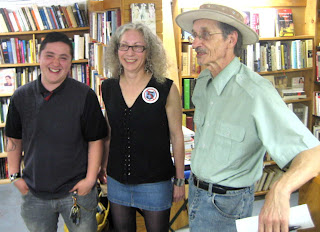 
Dr. Phil Metres' latest book, Ode to Oil, was just published by Kattywompus Press. Find him online at www.philipmetres.com.
Posted by John B. Burroughs at 11:02 PM No comments:

Music and Words for Peace - May 14th in Cleveland 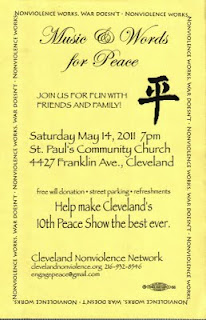 It all happens Saturday, 7 p.m., at St. Paul's Community Church, 4427 Franklin Avenue, Cleveland, Ohio. (Click on the image for a printable flier.)
Posted by John B. Burroughs at 11:49 AM No comments: 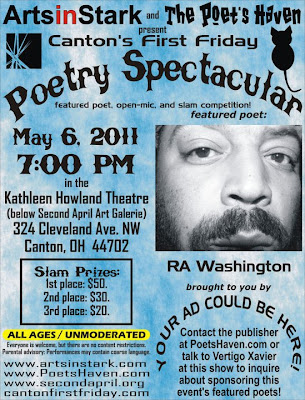 RA Washington is a writer, multi-media artist, and musician living in the historic North Collinwood neighborhood of Cleveland. He is the author of a dozen books, most recently the novellas Open and HUEbris. Washington was awarded a Wexner Center for the Arts Fellowship in 2001. His paintings, photography, and mixed media installations have been exhibited in numerous galleries and art centers, including ARTbizzarre in Montreal, FACT.CO in London, and as part of SPACES Art Gallery’s Afrofuturism Exhibition in 2006. Washington's free jazz opera, Along the Eastern Shore: A Tribute to Albert Ayler, was premiered as part of the 2006 Cleveland Ingenuity Festival. A member of the performance ensemble Black Poetic, Washington is currently working on a play and film project based on the life of James Baldwin.

This is an ALL-AGES/UNMODERATED event, meaning that all-ages are welcome to attend and participate, but parents should be aware that there are no restrictions on language and some performances may contain adult language and content.
Posted by John B. Burroughs at 11:25 AM No comments: