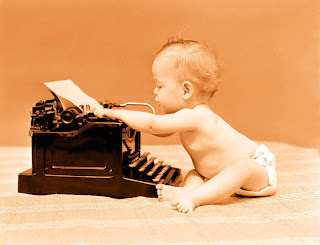 was thinking on poets who either revise, destroy or write off their early work as sophomoric, or immature. for example one ElLay poet i know was invited to collect his work of thirty-five yrs, and went back to homogenize the punctuation and line break formats of the collection. another poet, Hart Crane, left in his will the instruction to disclude early works from print. a poet i admire Charles Potts declares in a preface to a reprint of some early work, of course these poems were written young, and so cannot be taken seriously.....
other poets i know, who exist in piles around the house, have taken whole piles of poems and recycled or shredded the paper.

meanwhile there are poets like Rimbaud, La Forgue, Levy, etc. who wrote while quite young and even expired early. does the fact that their poems were written before the age of thirty make them immature or somehow less effective? should we discard the work of ourselves or other poets created before hemmeroids?

i think it unwise to discount early works.

to change works, or "update" them to an artists current style (to me) somehow threatens the integrity of the poems as they were written and edited in the first place. besides, isnt it fascinating to read the work of a poet one admires in the stages of unfurling?
i mean, wouldnt seeing the earlies and having read the currents make some deeper impression of who the poet is as artist, and individual?

by the way, Crane's instructions were not followed. the "collected works of Hart Crane" i have come across all include the early works, prefaced by a statement of the artist's (ungranted) wishes. but so many literary figures were postumously disrespected in this manner.....

so, do you keep your early work? have you restructured it? do you intend to publish it, even if ancient? are you embarrassed by it? i'm a dyin' ta know.

I hate it when people revise their early work because they don't think it represents them.

The person who wrote at age 20 isn't the same person as the one who wants to revise it or destroy it at age 50. You don't really have the right to destroy it, since it's not really yours to destroy-- it belongs to that long-ago you, not the here-and-now you.

(on the other hand... I still have some old poetry that I wrote when I was nineteen and twenty. I'm not going to destroy it, but I'm not about to publish it, either. The me who wrote that at age 20 isn't the me of now.)

I keep much, mostly because I'm always anxious to get on to the next project, poem, etc. I leave the stuff behind in many nested folders on my computer, some of which never surface again.

Our blog is seldom revised although I'm very embarrassed about much of the writing on it. I worry about people seeing things "in progress" and making judgment on all our work because they see the nuts n bolts of it day to day. Our revised work is much better than what comes out initially. But blogging has also made me a better communicator, a better writer. I like to write for an audience every day. I do worry, tho.

I agree with the thought that the person I am now is not the person I was 20 years ago, and consequently, those poems don't really belong to me> to revise. Besides, I think it's interesting to go back and see the genesis of ideas, or styles, or voice, of the earlier poet, as compared to the more refined, defined poet of "now"-- even though my earlier poems often embarrass me. I know that I really enjoy reading the raw, unpolished earlier works of poets I admire.

I keep everything I write. I even have the first poem I wrote. Though most of the stuff is hard to read. Even the stuff I wrote 3-4 years ago is hard to read. I don't go back and "revise" the old bad ones. Though I sometimes go back and take out lines from them to use in other poems. I like to keep 'em around to to show young writers, that hey, your work's not always gonna be bad, look what I used to write! haha.

I keep everything, everything, EVERYTHING! From finished poems all the way to little scribbles on napkins that never end up making their way into a complete poem, because you just never know!

I even have a small folder of pieces that I set aside, fully intending to revise someday because I liked some of the concepts so much but not the way they manifested themselves. That was quite a while ago. I still haven't revised them and probably never will.

But I think destroying our old work is NOT a good thing to do. Yes, we've progressed and grown, but that doesn't devalue our early work. If people found worth in what we said when we began writing, then it still has worth, even though our skill and craft may have progressed light years beyond where we were back then.

I know that there are some pieces I wrote a few years ago that I will probably continue reading out for the rest of my life and would love to see published. Of course, there are plenty of poems that should never see the light of day again, either...but we write pieces like that all through our lives as well ;)

I also agree that we don't "own" those pieces anymore. But not because they belong to our younger selves. I think those poems (like all art), belong to the observers, the readers, the listeners. After all, a poem hidden in a drawer and never read is not a poem at all. The ones who need to hear what we said, the ones who take something valuable away from something we wrote--THEY are the ones who "own" the work. As poets, we are simply the creators who string the words together, set them free, and then hope that someone out there latches on to them.

Who are we to deprive our readers from seeing our earliest work?

Quick rambling response, now that I finally have a moment to respond to this very interesting blog:

I keep everything. I've written prolificly since around my sophomore year of high school (1981-82). And everytime I change addresses I second-guess having kept all those heavy boxes. But I'll never get rid of it all. I look back now and think that 90% of the poetry I wrote before 2008 is doggerel. Embarrassing stuff that I'm thinking about digitizing and posting on my website (I have posted a few old items on my blog, making their context clear, to sort of test the waters. I'm only reluctant to post it all because I don't want folks to judge me as a poet based on that stuff. I keep the old versions as they were written. Even when they fail as poetry, they are valuable little snapshots of my life, mind and evolution. They're also coming in quite handy as I write my memoirs. But even though I keep the old shit as is, I've begun doing re-writes of some of those pieces - because many have potential. Or I take the occasional good line in an old piece and write a new poem around it. But I never get rid of the old version. I may not disclose, but neither do I dispose. Upon rare occasion I find that people like the older version better. Usually it's the other way around. but I think both have value, if only to me.

Contrary to what the other commentators have said here, I don't see why someone shouldn't revise or throw away old work.

It is true that, in a sense, I'm not the same person I was when I was twenty, but does that mean I do not have a right to revise the poems written by that "me"? Personally, I have gone so far as to give myself the exercise of revising poems by Dryden and Milton, so why should I not revise poems I wrote when I was younger? If one can improve a poem by changing a word or two, or by adding something, or by using it to create something completely different than the original conception, then I do not see any reason why one should not do so.

In my opinion, some things simply are not worth saving and I probably should not have killed the tree they were written on. Other things might be changed, improved even. Should I be "faithful" to the "integrity" of the poems as written? If the poems were written badly, no. I cannot be faithful to inferior work, whether it was written two hours ago or two decades ago. If I can find a way to improve it, then I shall do so.

But even this is mere opinion. Please don't take the harsh tone for polemic. It is not intended as such.

From "Il Postino" (thanks katey for reminding me.) Mario to Neruda: "Poetry doesn't belong to those who write it, but those who need it."

And from Paul Valéry:
"A poem is never finished, only abandoned."

a toast to all poems left behind.
and some buttah fer the ones we keep!