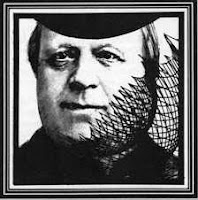 After writing about auto generators of poetry last week, my thinking drifted over to the book The Policeman's Beard is Half Constructed, first published a quarter of a century ago, back in that ancient era of 1984 (in computer terms, that is like the bronze age). This is a book, half text and half poetry, the first book to be "written" by a computer program, "Racter". It doesn't actually make sense-- of course, half of the fun is the fact that it doesn't really make sense-- but Racter sometimes comes up with text of strange, sometimes hallucinogenic intensity:
Racter writes:
A hot and torrid bloom which fans wise flames and begs to be redeemed by forces black and strong will now oppose my naked will and force me into regions of despair.
Often Racter writes with the simple diction of a Dick and Jane primer:
Bill sings to Sarah. Sarah sings to Bill. Perhaps they will do other dangerous things together. They may eat lamb or stroke each other. They may chant of their difficulties and their happiness. They have love but they also have typewriters. This is interesting.
I like that. "They have love but they also have typewriters." He should have stopped right there.
("He"? Why am I calling a computer program "he"???)
Various people discuss Racter's text. Tiff comments that it's questionable as to what extent Racter "wrote the entire book itself without the influence of a human helper, which is of course a good point-- if nothing else, the task of chosing what to put in the book makes a big difference. Lance Barton reminisces about it as a "a bizarre novelty". Which, of course, is what it is.

More amusingly, in Atari archives, Bill Chamberlain (who co-wrote the program) gets Racter to write about itself. Racter shows strange insight:
"...My own dreaming is daintily incited by the delight of these conflicts. A monograph or periodical on my fantasizing is understood by a physicist. A cosmologist can sing a conversation with a computing-device; I understand that. But a doctor or obstetrician? No! So I cleverly will cry to myself. Craftily, inevitably I am pondering about me. There are neutrons and quarks and protons in me. They assist me in fantasizing and dreaming."
I can say no more about myself-- there are quarks and neutrons and protons in me.

The book itself is available as a pdf.
Posted by Geoffrey A. Landis at 11:59 PM

Rachter is my new favorite author! :)

"They have love but they also have typewriters."

That may be the best line ever written.