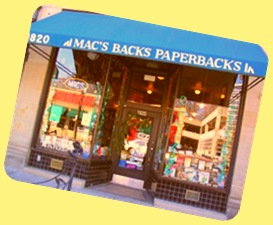 Kathleen Calby is a poet, but she won't be reading tonight. Instead she will bring quartz gem crytal bowls, ancient Tibetan singing bowls and Solfeggio tuning forks to create sound environments, what she calls poetry without words. Kathleen has been working with sound and harmonics for over ten years ----it will be a fascinating aural experience.

Mike Goldstein writes that he will read satirical poems about current events and serious poems about Buddhism. He also will bring along his saxophone and bassoon and play them in unflattering positions. Mike has been a regular at Mac's readings for many years and was first featured in 1994.

Brian Taylor is a poet, photographer and rider of his bicycle all around town. He has been writing and reading his work at venues throughout Cleveland since the early 1990's. He has competed in the Haiku contests at the National Poetry Slam and has participated in several Haiku Death Matches.

Posted by michael salinger at 8:55 PM

Sorry I missed it! I have too much going on this week - and this is the only evening I have available to get anything done at home. Wish I could be in two places at once!

This was definitely an intersting one - I'll post a write up next week.