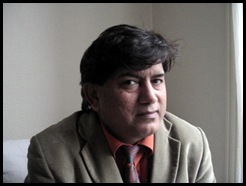 Yuyutsu RD Sharma is a distinguished poet and translator. He has published eight poetry collections including Space Cake, Amsterdam, & Other Poems from Europe and America (Howling Dog Press, Colorado, 2009). He has even launched a literary movement, Kathya Kayakalpa (Content Metamorphosis) in Nepali poetry.

Space Cake appeared in The City:

“Don’t panic,” they said,
remain cool like your Krishna ,
meditate maybe like Buddha,
uttering ‘Om Mani Padme,’ jewel in the lotus,
or lie down and relax
like Vishnu on the python bed
to float on the ocean’s currents,
buoyant on the invisible thread
of your breath in slow motion…

Millions of cats prowled around me.
Smoke from shared sex
and hashish joints stung my eyes.
Unsettling tongue
of an awkward fire fed my stomach.
I skidded queasily towards
towards the formidable edge,
unknown ominous frontiers of human life…

They laughed a secret laugh
behind my back – “Isn’t it crazy that
this man from Kathmandu should get stoned
from a piece of space cake in Amsterdam ?”

“Don’t be serious, laugh,
celebrate the flame of life!” a woman’s voice said.
“Hold my hand; I can imagine
you are alone on this trail.
I’v been there once,” she whispered.
Her tongue curled like a dry leaf in my ear
and crackled “How much did you take,
just a piece? I took thirty-eight grams once,
It can be crazy if you don’t know it’s coming.
Just don’t worry too much.
Don’t lose your control over things.
You can kiss me if you like,
You can pat my back,
tickle my belly or stroke my breasts
for a while, if it comforts you.
Sometimes it can be heavenly,
this licking the rim of the forbidden frontiers of human life.”

“That’s what he wants, that’s exactly
what he’s looking for,” a voice leered far off.
“But I have to go ultimately,
I’ve a man waiting at home for me.”

“Maybe read a poem of yours,”
someone said. My heart raced wild
and I heard some girls gossip in the next room—
What if he gets sick in Europe?
Don’t we get sick in Asia?
“Just take it easy,” another voice echoed
“You won’t go psychotic. Remember one thing,
whatever happens, you can always make a comeback.”
Faces of my dear ones veered past my face.
I felt delicate thread of my life
slipping through my fingers
“Hey man, it’s fine. Don’t worry too much.”
My host shouted. “Drink lots of water.”
“Drink black tea or coffee,” a guest suggested.
“Or take lots of orange juice.”
“Maybe sing your favorite song,” a woman said.
“Or recite one of your Hindu mantras.”
“Maybe stick your finger into your throat,”
another voice came sheepishly, “and throw up.
You probably haven’t digested everything yet.”

Questions came like wind slaps.
“Can you tell me what they call boredom
in your mother tongue? Do you remember
your email account and password?
Discuss your children, if you have any.
Shall I bring my little daughter before you?
Maybe you’d feel better then,
seeing her brilliant eyes.”

I imagined a child’s face and clung to it,
like a penitent would hold onto
a sacred cow’s tail in his afterlife,
and slept on it, all through the river of blood…

Hours passed by
and then I heard someone say—
“What if he had freaked out?
What if Death had stalked our house tonight?”

Hearing these words, I woke up
knowing I’d come back, stepped on
the familiar shores of life
where Death’s feared, a distant distrustful thing.
My drowse burst like a glacial that cracks
from rumble of a seed of fire
that explodes somewhere in earth’s deep sleep.

Posted by michael salinger at 8:53 AM

A nice poem. It reminds me of the space cake I had in Amsterdam. I remember it tasted really nice, but I forget everything else.

I saw him at Visible Voice - he read for about an hour and kept us engaged the whole way - answered questions afterward. I could have easily listened for another hour - and there are few folks I'd say that about. He's a great story teller, fine poet, and a very nice human being - bounced back and forth between his various books, mixed in the perfect combination of humor and seriousness - and his work is a true horizon stretcher. I left wishing I'd brought more money, because I would have loved to have bought copies of ALL of his books.