Theory: George and the Incurious Poet 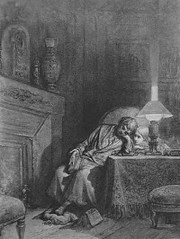 The author of fantasy has fewer limitations than the author of realism. Anything is fair, right? Armoured bears and tiny spies who ride dragonflies. Surgical enhancements that give a person Special superhuman powers for running, climbing, and flying.


On Saturday, January 23, 2010, the National Book Critics Circle announced the finalists for its book awards for the publishing year 2009


﻿Science fiction writer Ursula Le Guin has gathered almost 300 signatures in her fight against a Google scheme to digitize books.

There are several kinds of orbits in the orbit catalog.

Another woman slain makes a crime fiction writer conclude: It’s a man’s world. We just die in it...

Hm, nice essay at "It would be better if all poets were thrown to the dogs of public opinion" -- he makes a point similar to the argument I'd made here back in September (but more eloquently).

I was just looking at a couple of recent listings that passed by me... one was for a chapbook contest, with a twenty-dollar entry fee. Another was for a literary magazine, which had a fifteen dollar "reading fee" for submissions. Poetry publishers seem to have discovered that they can support themselves with money from grants and money from the poets themselves, and they no longer need readers at all.

I'm not sure I don't agree with him: "The best thing that could happen to poetry is to drive it out of the universities with burning pitch forks. Starve the lavish grants. Strangle them all in a barrel of water. Cast them out."

(I kinda wondered about that line "burning pitch forks"-- could he not decide between "pitch forks" and "burning pitch"? But on second thought, I think I like it-- it's an interesting image, anyway.)