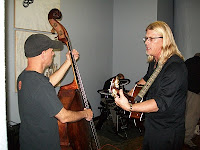 Ray McNiece and his infamous Tongue-in-Groove band will be hosting a solstice poetry jam party on Tuesday December 21st 2010 from 9 pm to 1 am at the Barking Spider Tavern, 11310 Juniper Road in Cleveland. Says Ray, "Tis the season, it's the longest night of the year, so let's drink every last drop of christmas ale and sing and be of good cheer, bring your solstice hymns, let's light up cleveland with our spirits!"

[photo of Marino and McNiece by John Burroughs]
Posted by John B. Burroughs at 12:16 PM

Happy solstice to all, and to all a good night!