With all the discussion
on these boards lately about poetic forms, I thought it would be interesting to take a few moments to contemplate some of poetry’s lesser-known structures. While some of these strategies have fallen by the wayside over the years—some for obvious reasons, others, like the dodo, waylaid by cruel and unfortunate circumstance—it is of the utmost importance that we remember that at one time these poetic expressions all had their adherents and champions. 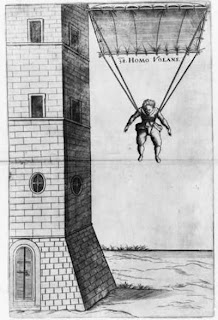 The Deterministica: Originally appearing in eighteenth century England, the Deterministica’s arrival coincides with the conclusion of the Great Parachute Wars of the early 1780’s. In fact, the form’s progenitor, Philip Whaley-Horseman, had been serving out the conclusion of his indentured servitude (a twenty year term) when he noticed a preponderance of determiners in the standard parachute assembly directions, specifically the articles a, an, and the. Whaley-Horseman’s first endeavors focused primarily on these initial three, but later went on to include not only determiners but nearly every preposition extant at the time.

a with each
the across
an both
the within
a the, a an, an a

Unfortunately, the above poem—one of the first daring experiments in language conducted by Whaley-Horseman, who established the memorable and moving hinge of the a/the/an/the/a pattern—proved to be the form’s greatest poetic expression. Later efforts, such as Sir Edmund Roque’s preposition-laden “Beneath But By, Beyond Like Near” (famous if only for its insipid lines “behind among behind/between behind, into behind/inside, inside, inside behind”) and Willary Prederick’s epic, “Next,” so-named for the fact that the title word repeats for 700 lines in the middle), fell far short of the form’s initial brilliance, and Whaley-Horseman spent the remainder of his life attempting to prove that his genius was indeed more than dumb luck. He died in his 21st year, after reciting his masterpiece and then leaping from mid-way up a rather large tree with an improperly assembled parachute.

Email ThisBlogThis!Share to TwitterShare to FacebookShare to Pinterest
Labels: theory

I enjoyed reading this. Though I've always had a soft spot for experimental poetry, I must admit I was totally unfamiliar with Whaley-Horseman. Thanks for the education. I look forward to your next post.

I have a sneaky suspicion from finding neither Whaley-Horseman, Edmund Roque nor Willary Prederick anywhere that this might be another paradelle.

We should also recognize the rhyming works of the Scottish master of deterministica, the late Hamish Tummler.

My this either
Your that neither

The several few
A many two

Some much whichever
One enough whatever

Which each one
Those any some

All these the
Another our a.

I look forward to hearing your thoughts on Gettouda Pointillism, although usually a couple of steps back solves the problem.

Never have I enjoyed being schnookered more. Paradelle indeed - not to be confused with the two computers in my house, which are actually a ParaHPs.

Gertrude Stein's chimney sweep, Bert, penned a deterministica’ by scrawling his finger in the soot on the hearth of Ms. Stein's soon to be famous red tiled fireplace the day she moved to Paris.