Book & Film Review--Haiku: The Art of the Short Poem by Tazuo Yamaguchi 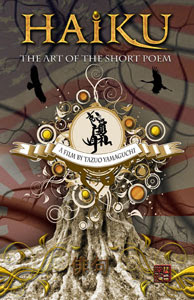 Tazuo Yamaguchi has earned a national reputation as a poet, touring performer, and filmmaker for almost a full decade through his solo tours, his films, his long list of collaborations with some of the nation’s finest poets and artists, two national haiku championships, and his "provocative" poetry workouts and workshops that guide the voices of youth to the elders. Direct descent to Shigin Poets and Royal Samurai, Yamaguchi has published 4 books of poetry, 6 recorded volumes, and produced 2002–2007 national Poetry Slam dvds.
His most recent film is Haiku: The Art of the Short Poem, distributed with an accompanying book by Brooks Books Press. Based on the Haiku North America Conference of 2007, this is the first feature length film about haiku in English, and contains not only panels and readings from the conference, including a head-to-head slam hosted by Yamaguchi himself, but also many insightful interviews with the poets and editors from the conference, including William J. Higginson, Jim Kacian, Bruce Ross, A. C. Missias, Peggy Willis Lyles.

What is interesting about the film are the many questions which it addresses. Discussions and interviews are focused on not only the history of haiku or the history of haiku in English, but also what it means for a form to be carried (translated?) from one culture to another, and what works in the new language and what does not. For many of the haijin interviewed, the seventeen syllable form is not as important as capturing a single moment which can resonate in the reader. That seems to be the only point on which they converge, with each author presenting their own take on how to capture that moment. This provides an interesting discussion and broadens the definition of haiku beyond the trappings of syllable count with which many students of poetry are familiar. The film also shows moments from readings and panels at the conference.

Of particular interest were comments made by Sonia Sanchez on her relationship with haiku, as well as the connection between haiku and the blues, in terms of emotion and immediacy. Though the film is the center piece of the project, the book serves as a companion, highlighting specific haiku from the film as well as pertinent quotes. There is nothing in the book that isn't in the film, but reading the haiku on the page allows readers to reflect a bit longer than allowed in the film. This is not to blame Yamaguchi for rushing. The film allows each haiku the length of space needed to breathe; however, like any good poem, a haiku should linger with the reader, and should be something they can revisit throughout the day or week to savor, and presenting the haiku in the book allows for this experience.

In the film, the late William J. Higginson asks "What is haiku for?" and answers "for sharing." Tazuo Yamaguchi has captured this aspect of haiku in his film Haiku: The Art of the Short Poem; I encourage all readers and lovers of poetry to receive the gift.

Neat review... thanks. Liked the thought that Haiku and jazz are related... interesting.

Yes, Amazon. Also, if you go to the Brooks Books site:

you can order it directly from the publisher.