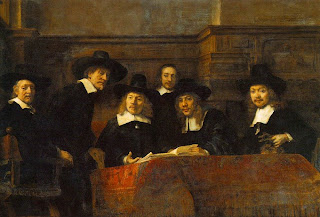 The Mathmajora: After the emergence of haiku in the west, Dutch mathematicians began exploring the radical implications of the 5-7-5 formula, first doubling and then re-doubling the syllable counts (10-14-10, 20-28-20, 40-56-40, onward and upward). Here are two examples from Piers Drukker, an early proponent of the form (and also a third cousin, twice removed, of Philip Whaley Horseman):

My Labor
Only one thing from this poem may be asked;
least of all, should the question matter. Breath rises, swirls blue,
and then I count all morning in the cold.

Some say last night’s open candle sputtered and died, its fine flame ruined by the one

Who bored us all with his mathmajoras improperly counted. I rebuke him here, now, having already warned

him once. Next, we cut out his tongue, burn him at the stake. Smoke rises in the morning.

It is perhaps ironic that the rigid, uncompromising standards of the Dutch masters eventually led to the mathmajora's demise. Due to their insistence on unbroken textual lines, the sheer size of their publications became problematic, (somewhere around the syllable count of 20480-28672-20480, the pages were so cumbersome that they could not be turned). Drukker, among others, began playing with elements of the formula: 5 letters, 5 words, 5 appearances by words containing umlauts, 5 references to dykes and flooded plains. These experiments ended abruptly, however, with the death of Drukker, who disappeared from his workshop at the age of 37. Some suspect he was formally censured by his fellow mathematician poets; others claim that his math inadvertently opened a portal in the space-time continuum.

Seeking to reign in the rampant immensity of their subsequent publications, the Dutch next introduced algebraic functions, and may have continued inevitably into calculus if not for the belated arrival of the initial book of haiku’s companion volume of tanka. Who among us can honestly say they would be willing to do all those calculations again?

Right after that, the whole thing with the tulips happened.

Posted by Henry Maxwell Stearns at 9:56 AM

Those wild and wacky mathematicians! Can they never leave anything alone? I do believe I've seen a textbook on this subject though. It was rather...dense.

weird stuff. never can tell about those Dutch.

math meeting
they try to divide a poem
by 14