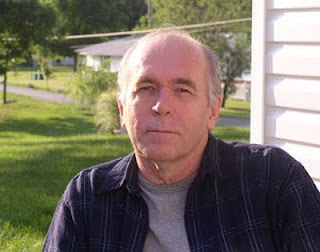 I've been struggling with something that maybe some of you share. I am a Cleveland area writer, among other things including a teacher, editor, reviewer, biographer, and publisher. I think it's the latter that gets me in trouble as a writer. So many of the folks that I have published continue to see me as a "publisher" first, and maybe I can understand that, but I can't accept it because I am a writer first. In fact that's how I got into the publishing side...because I could see how things might be done better and how many good writers were being excluded. And so I and some others founded Bottom Dog Press back in 1984...25 years ago. I do want to clarify that I am not alone in this. In Cleveland we have many writer-publishers: including folks like Jim Lang, Bree, Mark Kuhar, Michael Salinger, Rob Smith, Claire, many really. And I'd just like to clarify for you fellow writers, that we see ourselves as writers first and would appreciate that kind of acceptance. We shouldn't have to leave the area to be seen as the writers we are.

I remember interviewing Lawrence Ferlinghetti for the biography I did on him, and he confessed to me that one thing about Jack Kerouac that bugged him was that Kerouac insisted on thinking of him as a bookseller, the smiling book man. Thing is we do that service to writers at some expense...time chiefly...and we'd like to be appreciated for who we really are. That's it, that's what's bugging me too. What do you think?

Over the years, many figures in the literary community have served as writers and also as editors/publishers-- there's no reason you can't be both!

You don't get it, Geoffrey. I am both and have been for 25 years. What others don't get is that I'm a writer first and deserve respect for that and some kind of support from my writer colleagues. I've done 12 books ...fiction, poetry, biographies, translations, literary criticism. Thanks for the thought.
I'm not alone in this. I have an artist friend who runs a gallery, and her artist friends see her as a curator first and an artist second. That's the problem.

It's a pretty thankless vocation one embarks on when one decides to become a promoter of other artists practicing the same discipline– especially if one is not inclined to toot their own horn at every opportunity. By stepping into the muck that is running a reading series, being a publisher, editor, or arts organization board member inevitably one will become disenchanted.

Part of the problem is that a good portion of folks like to compartmentalize people in their world. If you’re a publisher you stand here - if you’re a reading series promoter then you stand over here - you call yourself a poet – okay, you’re over here – but you – performance poets you stand further away there to the left – page poets go get yourself in the shade before you burn – young urban hipsters grab a smoke and sneer at the rest - there’s no space to accommodate anyone who straddles more than one calling.

But this is what so many of us who call ourselves poets do. Most of us have day jobs and usually those jobs have nothing to do with our artistic leanings. But within the tight circle of our artistic world those unrelated day jobs are almost never acknowledged so the clan as a whole has been conditioned to ignore adjunct careers like some unfortunate Kennedy cousin locked in the attic. So when your second or third occupation is also in the artistic sphere people are going to pick one in order to put you on the shelf in their skull.

This is demoralizing to those of us who have done this juggling act and to quote Slick Willie – Larry, “I feel your pain.” Instead of being appreciated for the extra effort – one can end up feeling their motivations questioned and their efforts slighted or just plain ignored. Sometimes it’s enough to make a person walk away from a scene they thought was integral to their image of self.

Watchya gonna do? You keep doing the good work you’re doing, chalk it up as their loss, try to put things in a larger perspective and maybe secretly hope that karma settles a score or two.

Thanks for the good thought, Michael. You always have a way of putting things that says more, and that's why you're a writer to me. You are also 'a tireless supporter' you know that phrase...it's a lie. Sometimes we all get tired. I'm not too tired or too old to pop. I just want to call out the need to keep the community first. I'm part of that and always will be. Thanks for sharing the pain and the insight.

Larry and I are in the same boat. I started Drinian Press so that my novels wouldn't die on the hard drive. I like to think my writing is good (McGowan's Call was cataloged in the Library of Congress) but everywhere else, I was immediately quarantined as "self-published". At that point I realized that I could not help myself very much, but I could give other good writers a book to hold up and not bear the stigma.

The result is a shelf load of good books, and I have become "the publisher" who can't get his authors' careers off the ground!

I keep trying to walk away, but the writer in me wants it to work. I keep writing, because that's who I am. (Publishing would be much easier to live without!) As much as I would like readers to look at my books, I would like the art's groups and funders in Ohio to put aside their forms and their prejudices about grassroots writers. (Face it! It's self-defeating to believe that all good books come out of the major houses. After all, those houses are not interested in Ohio/Midwest literature.) Instead of ignoring the local scene, why can't they just read and make a decision based on the writing rather than the binding? It's called critical thinking, and it's a skill I teach in my philosophy classes.

I know the feeling, Larry, and there are days when I am transported back to my college/grad school years when we advocated "Up the establishment!"

Larry--i suggest you fall ill. during that time you will be unable to edit, design, correspond, typeset, distribute or otherwise publish. if you dont itch for it, there may or may not be reasons why--if you itch for it return as soon as possible. it will take more than syrup of ipecac--aim for getting the swine flu at least.

p.s. people dont respect you when you publish them as much as they revere those who reject them and their writing. (i'm talking about susceptible people here.) its a humanity thing. also if you give of yourself you are unlikely to get back-'swhy you cant do anything with but the motive to follow through on a good idea, to achieve that quality yr after, because u r driven....not for any reward. something to chew on while you stave off the flu-shot weilding docs... -B

p.s. or move to california, become totally self-serving (which is average out there) and at every turn toot yr own, remind folks when it is tit for tat, memorize names and speak in a loud gladringing voice, buy dinners, read manuscripts as a favor, always open with a complement, stay away from younger married women, be sure to sleep with any younger married woman who wants you to read her writing, charge even friends for copies of your book, answer emails with an automated message, read your poems as if you are charming terrorists out of torturing you for good. -maloney

I am a writer, instructor, actor, director, playwright, coach, and in this worn out town... none of the above is taken seriously anymore. Guess I had my heyday because I can't find a stage (even though I was once chosen as an award-winning actor by Marianne Evett). I have over 7,000 poems in my collection, and only have one published book (which I self-published in 1988). Daniel Thompson was my mentor. I've been on dais with Chris Franke, Dr. Kilgore (deceased), performed for last year's Lit Awards at Playhouse Square, performed at The Cleveland Play House, Kennedy Center, Karamu, CPT, Dobama, Ensemble Theatre (where I will perform on Sunday, October 18, 2009 at a Benefit and Tribute to the Colombi sisters, and the Silvers at CPH) and I haven't been taken seriously as a professional artist since 2007. I equate it to the economy; I mean what else could it be?

Sorry if you think this response is disrespectful but would you mind looking at my latest manuscript? You can also find my words here:

If I could remember my e-blog password, I'd leave my Blog info for you to visit.

But if you wish to know more about my career, and me you can visit:

I apologise if this seems to be a rude response because I do understand your delimma, as a matter of fact, I personally OVERSTAND!

Forgive me and disregard this comment if you think I have been too forward and/or aggressive.

Possibly it stems from one's presentation of themselves. If one does not promote oneself as an author through various readings, open mikes, features, etc. the general writing community begins to fail to see said person as such. This, of course, is up to each author to decide for themselves, but I know that if I don't see someone for a year or two at various readings, I assume they've been too busy to write. If one's "day job" is publisher, the assumption would, for me, be that they've been busy publishing. If they're a teacher, they've been busy teaching. If they're a nurse, they've been busy tending patients. It really doesn't matter what the other job is, if one does not show up and present their work on a continual basis, their role as "artist" is superseded in peoples' minds by the other job. I'm not sure it's a point of respect or lack thereof, more a response to the focus of one's energy.