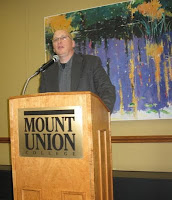 Stephen Haven of Ashland University was named the Ohio Poet of the Year (see my previous post)* for his newest poetry collection Dust and Bread, and, as part of the Ohio Poetry Day celebration, gave a reading at Mount Union College on October 18.
Haven's reading featured work from the prize-winning collection, and also some more recent work, poems about being a single father, poems about China, poems about growing up as the kid of a preacher in the Mohawk Valley (including a sestina about being snowbound with a bishop, which I found quite a tour de force). His reading was alive with alliteration and clever internal slant-rhyme. 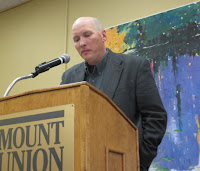 The Ohio Poetry Day event included a lot more than just the reading by the poet of the year. Following the reading and signing by Haven, the winning poems from the Ohio Poetry Day contests were read.
Some of the other poetry activities were poetry workshops and games-- including three overnight poem-writing contests** where the challenge was given 10 pm on Friday night and the poems turned in 10 am Saturday morning, the Evan Lodge workshop (with the interesting feature that the writers of the poems participated... anonymously. The authors of each poem were unnamed.) And an amusing poetry riddle game, "stinky pinky," from the Alliance poetry group (examples: A small flying insect? Wee bee. Wet canine? Soggy doggy. Tilted sepulcher? A tipped crypt. Beginnning of a lawsuit? Initiation of litigation.)
(The pictures in a slightly larger size can be viewed in my album. I'm sorry that I only have four decent shots of the event-- I was inadequately prepared, and my camera ran out of battery right in the middle of the reading!)
---
*one of two Ohio Poets of the Year in 2009. Although it's unusual for the award to be split, this year Terry Hermsen and Stephen Haven share the honors of Ohio Poet of the Year.
**Two of which I won. Yes! Too bad that the art of writing poems fast is not necessarily the same as the art of writing good poems.
Posted by Geoffrey A. Landis at 11:14 AM

I wish I could've been there! Did hear a lot of good things about this year's OPD....

Michael Schurch has a much more extensive set of Ohio Poetry Day Photos on facebook, including

And a whole bunch more