Sleeping With the Sun In His Eyes 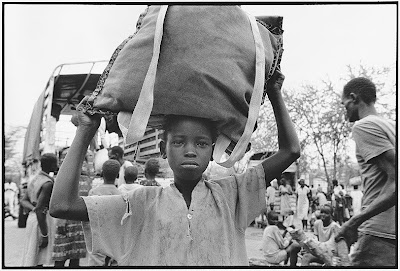 Green Panda Press Announces the forthcoming book by Bree and Akol Ayii Madut Sleeping With the Sun In His Eyes. Here is an excerpt--to pre-order a copy, or become a patron of the book go here.

When Akol first arrived in Cleveland, Ohio, and stepped off the plane what he saw was everywhere wheat flour. He knew before he came here most American people had plenty to eat. Still he was truly amazed to discover such surplus. Here, he marveled, people left their wheat flour to just sit in great piles everywhere on the ground.

Akol wondered if they had run out of the sacks used for holding the flour.

A white woman was nearby working for the airport. He went to her and leant in, to conspire in English somewhat wanting:


“I have never seen so much flour. We have people who are starve in my home country. Why don’t somebody send some wheat flour back to there?”


“Welcome to America,” the woman smiled her brightest at him.


Akol couldn’t wait to get outside. Immediately he knelt down to take some of the wheat flour in his hands. The flour was freezing cold! It began to melt away down through his very grip, making everything wet and cold. His hands, even his knees were wet.

Brrrr! He dropped the melting flour to the ground. This place was unreal. Here in this new city, as it was in a desert mirage, the hulking piles of food disappeared at the touch.

I will be getting used to this and more, he told himself.

He went to join up with his entourage: the local director of Catholic Charities, a case-worker, and a native-speaker—a woman who turned out to be his sister were among those who escorted the second Sudanese Lost Boy into cold Cleveland.